I'm amazed at the number of superhero games that are / have been / will be released this summer.

Icons was released earlier in late spring / early summer.  Its a nice little game from the designer of Mutants and Masterminds, and offers a quick and easy method to get you Superhero fix in.

DC Adventures was just released on RPGNow yesterday, although I think there is a revision going on with the PDF file.  I got an error with Adobe Reader, but Sumatra read it fine.  It's syncing to my iPad as I type.  Nice rainy day here in the Pocono Mountains makes for great reading time. It's engine is the Mutants and Masterminds system.

The Smallville RPG landed last week.  I haven't checked it out as I don't watch the series, but I have heard  good things about the series, so I may have to check it out as I run thru the other superhero rpgs. 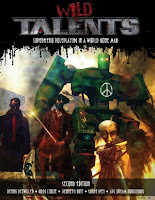 Then of course there is Wild Talents 2nd Edition, which I had overlooked until I noticed the current superhero explosion currently in effect.  It came out earlier this year, and I must say it looks nice.  The One Roll Engine looks interesting, tho' I'd like to see it in play  Then again, I'm a bargain hunter at hard, so the earlier Wild Talents Essential Edition for only 5 bucks is very attractive.

Feedback when I get thru some reading, although I may be running the tutorial from LotFP Weird Fantasy as a single player adventure with a DM later tonight or tomorrow.  If I do I'll post the results and review.
Posted by Tenkar at 3:29 PM