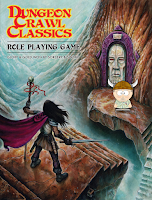 Now I will admit that as a (RPG) gamer I like dice. I mean who here doesn't?!

I'm also a self-diagnosed dice snob, using my old-school Gamescience dice to exclusion of almost any others. Kind of a difficult position to be in since I cannot really get any more GS dice. Sure, there are some available, but my ability to get all the dice I want, like another d30, yeah.....just not going to happen. I lucked out getting the last two d30's Zocchi had, but that tale has been told (hence the link).

As an almost aside, I used to play HackMaster 4th edition (I know, as if I've never brought that one up before) and I went through a stupid number of dice in that game. Like at one point I HAD to have a metric shit-ton of d6s and d4s for some of my DS Invoker's spells (including some for penetration rolls), but luckily back then I had the means and ability to purchase Gamescience dice, so I have a good supply of dice I'm not currently using....unless I want some of the odd ones, like d3's, d5's etc. While I have some, they are mismatched and not quite what I need when I'm playing Dungeon Crawl Classics or Mutant Crawl Classics.

If you haven't played DCC or MCC, the game can get a bit crazy with odd dice rolls, but the extreme randomness is part of the game's balance. You can get by replacing some dice rolls with others, like using a d30 for a d14 and ignoring any roll of  15+, but that doesn't work out that great......and just sucks if you're dice fan, and most of us are dice fans.

What normally happens is I use my normal GS dice set and then somehow I manage to get into a DCC or MCC game and then have a last-minute burning desire, nay need, for the full range of odd dice for a DCC/MCC game. Then I have to make a run to the dealer's hall and cough up $30 for whatever I can get. One set of dice for a pick-up game is fine, but not enough......I like to use two sets of dice when I play because, well.....you know.....sometimes dice just go cold and shit. If I'm stuck using a bum d20 I guess I could grab one of my regular dice, but then I'm mixing sets.....

No, I need two matched sets of dice. Since we have North Texas RPG Con coming up I figured I'd grab one of my older "emergency purchase" sets and find another matching set. Well that was my plan....

....until I found out that a couple of guys I knew from my HackMaster 4th Edition days had contracted with Impact! Miniatures to get their own batch of DCC/MCC compatible dice made. They're making them under the company name of Monday Knight Adventures and the dice can be found on eBay for now. 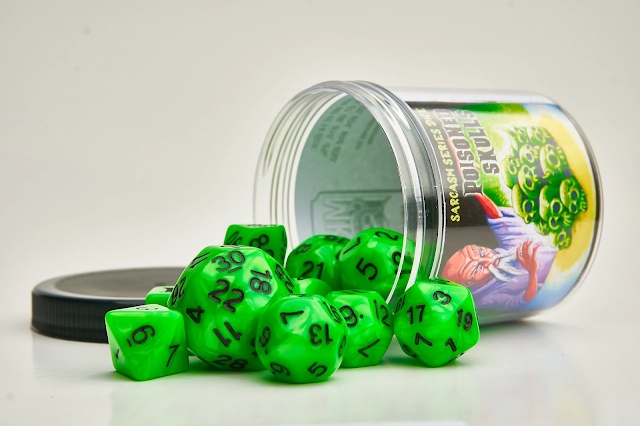 Now since I know the guys behind Monday Knight Adventures and despite their public attempts to sometimes come off as indifferent a-holes, they're actually good guys. Back in the day when I was fortunate enough to be on a business trip to Nashville, I'd make the 2 hour trip to sit in on their Monday night home game.....and when I needed some help play-testing some tournament adventures I knew if I flew across the country they'd free up a weekend to run through the adventures.

On a more personal note, when I was going through some tough times during my volunteer days, these guys (the whole group, not just the two behind MKA) epitomized the saying "Who's got your back?", which (ironically) was a HackMaster "thing".

Clearly I think it would be cool if anyone who is interested in supporting some good guys, or who needs some cool dice, heads over and picks some of these "Poisoned Skulls" dice off of ebay. Now I'm into this for more than just a cheap Tavern shout-out.....since I'm pretty much on business trips until right before NTRPG, I don't have the ability to make my normal GM thank you gifts this year. *Spoiler Alert* if you are reading this and happen to have me playing at your table this year, you're getting a set of these dice.

I figure this is pretty much a win-win-win.

Posted by Christopher Stogdill at 11:05 AM