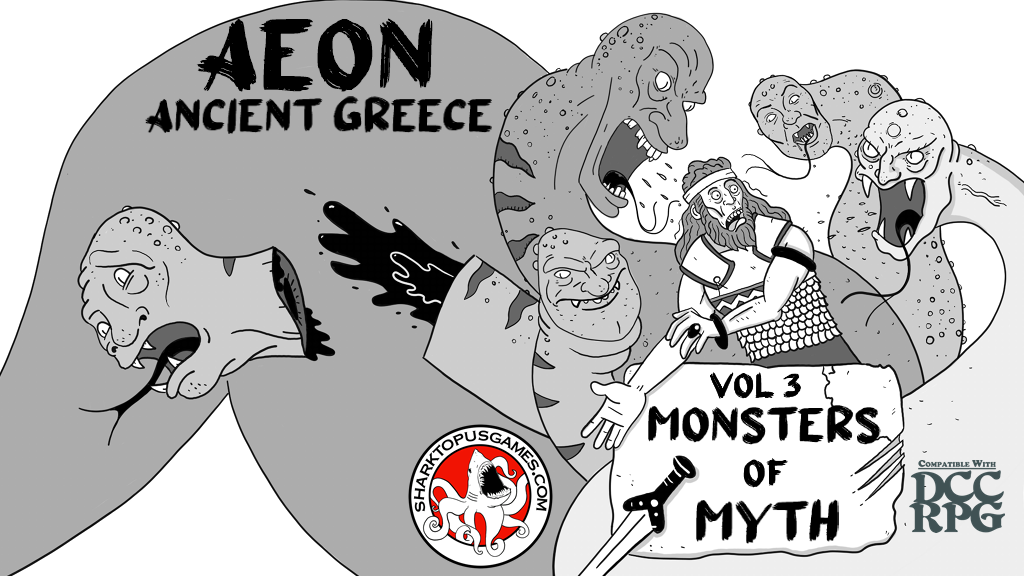 I've covered previous releases in the AEON series of zines. During the funding period of AEON Issue #2, our group was playing in JoetheLawyer's bronze age setting, and the zine was a good fit for flavor. No, we weren't playing using the DCC RPG rules (we were using Joe's bronze age fantasy heartbreaker rules), but converting from DCC to other OSR systems is fairly easy, the difficulty is going in the other direction.

AEON: Ancient Greece Volume 3 “Monsters of Myth” is as low as a single buck for the PDF, or 12 bucks for the Print plus PDF shipped worldwide.

Whether your campaign takes place in our Ancient Greek setting... In Lankhmar… On the Purple Planet… The Empire of the East… Mutant Crawl Classics…  Umerica… or your own doesn't matter because this brand new volume is going to help you bring the wondrous and downright terrifying to your campaign thanks to 36 new monsters inspired by Greek mythology for your Dungeon Crawl Classics game.

The Ancient Greeks measured their heroes by their mighty deeds.

And nothing will test your players’ mettle, luck, and their standing with the Gods, like a battle to the death with an epic monster.

Your players have better rested and healed up ‘cuz they’re gonna need all their HP, Spells, Abilities and Luck if they want to defeat, let alone live to tell the story of their legendary battles with these mythical monsters!

We guarantee your players have NEVER encountered any of these monsters before!