Remembering Our Fallen Instead of One Guy 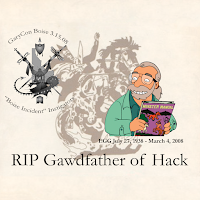 Just a head's up that I'm going to state an opinion that will inevitably piss off some people, but since this is the internet, ANYTHING I'm going to type has something like a 127% chance of pissing somebody off. "Ken Whitman is just misunderstood." and "I think kittens are cute."......while not equal in terms of PO potential, they both have positive PO factors...

....anyway. Hopefully you're having a good Sunday and if you're lucky you might be slinging some dice. If you're really lucky you're slinging dice at GaryCon. Now I've been to an early GaryCon and I hosted my own "GaryCon 0".......The folks that attended the informal gaming session after Gary Gygax's funeral often call that GaryCon 0.

Unfortunately I never met Gary, although I did briefly meet Dave Arneson. I have friends that have played at Gary's house a time or two. I think it's great that Gary's friends and family have put together a memorial convention, but....and this is the source of my initial warning...I think that collectively we shouldn't be celebrating Gary's life.

Don't get me wrong, I think GaryCon is great and should be a thing, but the average gamer doesn't have much of a connection to Gary Gygax. He's just a name. Sure he created this thing that we all love and enjoy, but I'm willing to bet that there is a HUGE overlap of gamers and lovers of comics & superheroes and how many of us celebrate Simon & Shuster?

How many of us had to think about who TF Simon & Shuster are?

One thing we probably all have are gaming friends that are no longer with us, people we *actually* have a connection with/to. What I'd love to see is our community gather together not so much to celebrate one guy's life & work, but to celebrate all of the RPG friends and family we've lost (including Gary). I'd love to gather with my remaining friends and sling dice, drink a little, and tell some tales of our friends and the stuff they got up to at & outside of the gaming table.

While I have friends at GaryCon and they're celebrating him, I'm at home reminiscing fondly of a few friends I'll not get to play with again.....one of whom I'm 110% certain would be at GaryCon right now doing something epically "stupid" in-character, but awesome like running around in nothing but used underwear or playing a torchbearer instead of a regular PC. Having a 1st level Magic user that tells everyone that their favorite "spell" is "Cast Spear" (i.e. his PC is a spear-chucker 99% of the time instead of *actually* casting spells).

I think we should just decide as a group that a specific weekend this month is set aside for remembering our fallen and that's when GaryCon is for those that can attend.

Posted by Christopher Stogdill at 12:01 PM