Two Days Left for the League of Dungeoneers Kickstarter 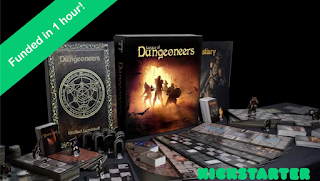 There are two days left (62 hours as of this post) on the League of Dungeoneers Kickstarter, "a detailed old school solo/co-op dungeon crawl with heavy RPG elements, lots of dungeon tiles, monsters, loot and replayability."

Personally I've (FrugalGM.....not Erik) almost jumped on this Kickstarter because I'd love to be able to run a solo RPG when I can't get my fix otherwise. I say almost because I've been burnt by Kickstarter before (Thanks Ken Whitman!) and something about a 1st Kickstarter project from a guy in Sweden seems...off to me.

Since there are a couple of days left and I'm interested, I figured that maybe I should take a bit of a harder look at this and see if I'm willing to risk the $150 for an all-in pledge, or a bit less for a different pledge level. Instead of doing this just for myself, I'll post the research here to share....assuming at least one other tavern patron has the same interest/concerns.

Not a lot to see on a high-level Google search on the creator, Michael Lundstedt, but that's not a bad thing. I did find a decent YouTube review that had an interview. Pouring through the comments on the review video, Dungeon Universalis keeps coming up.

The problem is that League if Dungeoneers has nothing to do with Dungeon Universalis (DUN) and Mr. Lundstedt isn't listed as a DUN contributor. No worries...again just a high-level initial pass. There was some good intel for the League of Dungeoneers.....but it was more of an advert on what you get if you back the Kickstarter, not quite what I need.

Good to know though that this particular gaming Kickstarter seems like the ideal RPG Kickstarter, as in "Hey I've made this thing I think you'll like and need help bringing it to a final form." and not "I've made this thing and while I clearly have the resources to bring it to market, I'd rather not put up my own money and will be using Kickstarter as a type of pre-order to put more money in my pocket and screw over the supply chain that helped me earn the money I already have...."

Clearly I have some bias or issues there, but it's a common thing I've seen and heard from others.....

Initially there was an earlier print & play version of this game and the Kickstarter is to up the production value and add some needed bells & whistles. Gaminggeek did a review of the earlier version where they self-produced those bells & whistles:

This (the Print & Play version) seems like a pretty sweet-spot for me, BUT it isn't available during the Kickstarter and there isn't an option for this in the Kickstarter. It seems like you could buy-in at the $11 "Dedicated Supporter" level and then pay $16 or so for the PDF, but the "Dedicated Supporter" level specifies you can't simply do this. Evidently it's the whole game or nothing.

I will freely admit that I made the mistake of trying to watch the Print & Play video before bed...and I fell asleep. All I got out of the first two videos were that I could make use of the map tiles in about any game, and that the game is crunchy.....and I tend to like crunchy.

A little bit of link-hopping and I finally found the video I was looking for:

A walk-through of a suggested initial battle hosted by the author himself. This showed me enough of the rules to see how initiative worked, how you can fairly decide enemy actions, and how combat flowed.

I've got enough to make up my mind, and hopefully if this is something that piques your interest.....well I hope you've seen enough to make up your mind. While I'd like a cheaper build-your-own approach, there are enough bells & whistles and different included add-ons that I'm in at the "All-in Tier".

Posted by Christopher Stogdill at 3:44 PM

Email ThisBlogThis!Share to TwitterShare to FacebookShare to Pinterest
Labels: kickstarter, not Erik, solo