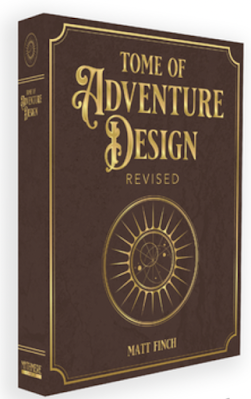 Matt just launched a new Kickstarter for the Tome of Adventure Design - Revised. Will this now be known as ToAdR? ;)

So, what do you get with ToADR?

Tome of Adventure Design offers a comprehensive method for designing an adventure all the way from the starting concepts to the finer details. Just as with creativity, it’s not a linear method: starting points can include a mission, a villainous plot, a location, or a new monster, but tables are provided for all of these common inspiration-points. For obvious reasons, the highest level of detail is provided for subterranean dungeon adventures, but a wealth of tables are also provided for cities and settlements, planar adventuring, and wilderness adventuring.

If you want to ask Matt questions, tonight's Talking Crit LiveStream at 8 PM Eastern will feature Matt Finch as our Special Guest. You'll need to be subscribed to the channel for at least 20 minutes before you can post a comment or question (that's to combat the spambots). Link below: