Let me get a few things out of the way. I'd rather be upfront than hear whispers in the dark.

1) Ascendant is written and published by Alexander Macris. I know there is a segment of the gaming community that has a hard-on for Alex. If you are covered by the prior statement, you can bugger off right now. This post isn't for you.

2) I consider Alex a friend. More than an acquaintance, less than a bestie. Still, it may color some of my observations, so you should be informed. Also, see Number 1, above.

3) Although I am a fan of the superhero genre, I've yet to find a supers RPG that I've felt comfortable with. At best, they've been "blah".

4) I bought the Print plus PDF version of Ascendant. Currently, the Print version is not for sale as it is being updated with errata. This purchase was made possible with your money, the readers of this fine blog, as it was funded by affiliate monies. This is NOT a review copy. When I do a review (so many books, so little time) it will be without obligations.

5) Alex DID send me the first chapter of his upcoming Ascendant graphic novel in PDF. I have done little more than look at some pretty pictures at this point.

6) The fucker has gone Platinum at DTRPG in 2 1/2 months. Very impressive.

Until tomorrow morning at 11 AM Eastern, Ascendant is marked down to 10 bucks in PDF from its normal 20 bucks. 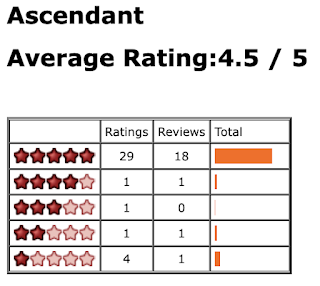 Ascendant is the superpowered role-playing game of infinite possibilities. In this 496-page standalone rulebook, you get:

Email ThisBlogThis!Share to TwitterShare to FacebookShare to Pinterest
Labels: ascendant, autarch, deal of the day, supers