Kickstarter - Not One, but Two Mörk Borg Compatible Adventures! (ThrowiGames) 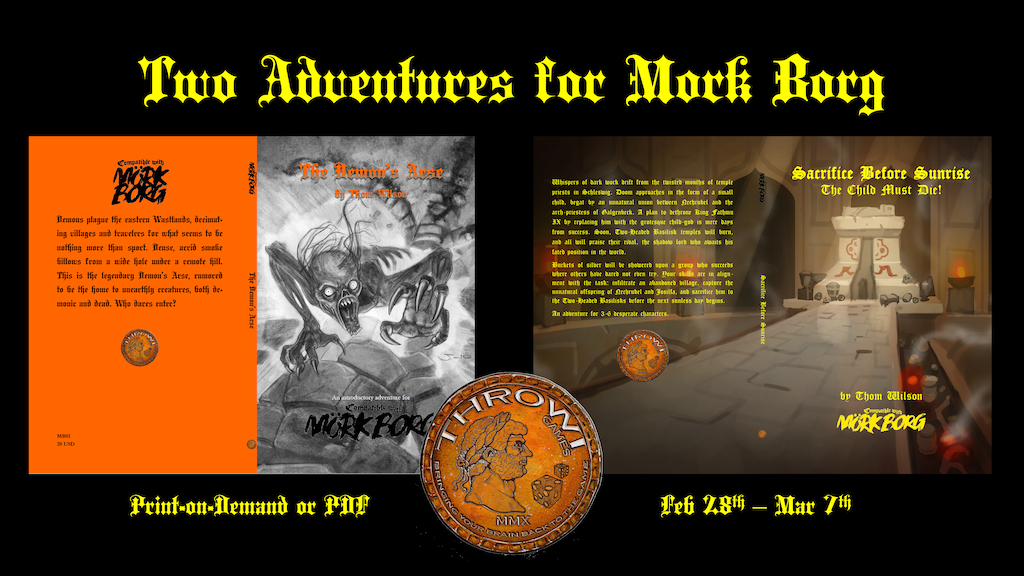 I'm putting this post up as I listen to the State of the Union speech. I know, dangerous but I am focused. Kinda. Not turning it into a drinking game. I promise ;)

Truth in posting, Thom Wilson is a friend of mine. I've been a special guest of Thom's Shire Con every year he's held it. I consider Thom a good friend of mine. That being said, Thom produces consistently good Kickstarter projects.

Thom is doing a short Kickstarter, with 5 days remaining in the funding period for the Not One, but Two Mörk Borg Compatible Adventures Kickstarter.

I'm in for PDF plus Print plus POD costs at 15 bucks. PDF only is 7 bucks.

There's only one thing better than a Mörk Borg adventure: two Mörk Borg adventures! That's right, two fully compatible adventures for the award-winning roleplaying game that we all love. Each adventure is 100% complete - fully written, edited, illustrated, and even test-printed! Backers will receive completed PDFs just weeks after the project wraps up and print-on-demand books within a few months.

Sacrifice Before Sunrise, The Child Must Die!

Whispers of dark work drift from the twisted mouths of temple priests in Schleswig. Doom approaches in the form of a small child, begat by an unnatural union between Nechrubel and the arch-priestess of Galgenbeck. A plan to dethrone King Fathmu IX by replacing him with the grotesque child-god is mere days from success. Soon, Two-Headed Basilisk temples will burn and all will praise their rival, the shadow lord who awaits his true position in the world.

Buckets of silver will be showered upon a group who succeeds where others have dared not even try. Your skills are in alignment with the task: infiltrate an abandoned village, capture the unnatural offspring of Nechrubel and Josilfa, and sacrifice him to the Two-Headed Basilisks before the next sunless day begins.

Demons plague the eastern Wästlands, decimating villages and mutilating travelers seemingly for sport. Dense, acrid smoke billows from a wide hole under a remote hill. This is the legendary Demon’s Arse, rumored to be the home of unearthly creatures both demonic and dead. Who dares enter?

Initially written for TotalCon 36 (play-tested at the convention). A mixture of 19 b&w and color pages*, hardcover. Approximate print cost: $8.00.

Each adventure has been designed for 3-6 desperate characters, and can generally be completed in 1-2 sessions.

*While several pages feature colorful backgrounds and bright-colored text, more than half are in standard B&W. These books were designed in typical MB fashion (bright colors, different fonts), but many pages have a layout similar to that of Rotblack Sludge (from the MB rulebook).