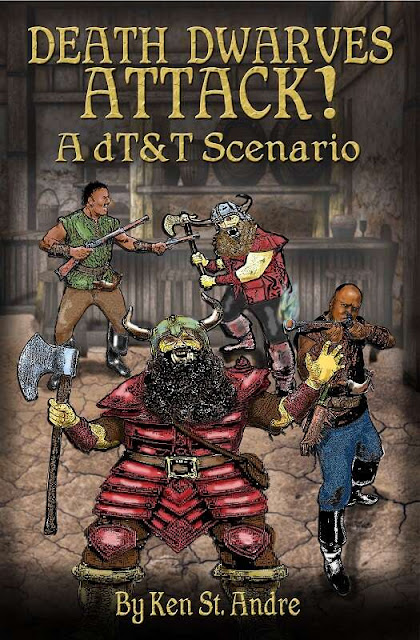 I am a great fan of Tunnels & Trolls, which is strange because I couldn't stand it when I was introduced to it back in High School in the early 80s. A fantasy RPG that just used d6s, WTF was up with that?

Later on, I found some Tunnel & Trolls Solo Adventures, and then I saw the system truly shine. Still, it was damn near impossible to find any adventures written to run with a group.

Today's DTRPG Deal of the Day is Death Dwarves Attack, a starting adventure for a group of Tunnels & Trolls adventurers written by Ken St Andre himself. Although it is written for the Deluxe Tunnels & Trolls rules, it should be easy enough to use with T&T 5e - probably the most popular edition of T&T. Normally $5 in PDF, until tomorrow morning Death Dwarves Attack is on sale for $2.50

This is a beginning adventure for Deluxe Tunnels and Trolls.  It's designed to be fast to play and full of action.  It's also the first adventure scenario set in the dark times after the destruction of the Empire of the Goddess in 1313 A.K.--a barbaric time with similarities to colonial America.  It's swords and sorcery and guns.

The Tavern is supported by readers like you. The easiest way to support The Tavern is to shop via our affiliate links. DTRPG, Amazon, and Humble Bundle are affiliate programs that support The Tavern.
You can catch the daily Tavern Chat podcast on Anchor, YouTube,  or wherever you listen to your podcast collection. - Tenkar
Posted by Tenkar at 9:49 PM

Email ThisBlogThis!Share to TwitterShare to FacebookShare to Pinterest
Labels: deal of the day, Tunnels and Trolls