Without further ado, lets dive in :)

Tome of Adventure Design - written and designed myMatt Finch, and likely nearly as influential as Swords & Wizardry and OSRIC to the OSR in general, I'm currently using ToAD to design the adventure I'll be running at ShireCon.
The Tome of Adventure Design is organized as a series of "books," each one providing resources at every step of the way. The vast majority of the content of each book is made up of random generation tables that we created over a quarter of a century (sigh) for our own use. It should be said up front that these are tables for deep design - in other words, most of them are too long, and contain too many unusual or contradictory entries, for use on the spot at the gaming table. There are already many excellent books of tables for use on the fly; the tables in these books are different. They work best as a tool for preparation beforehand, providing relatively vast creative resources for browsing and gathering, rather than quick-use tables designed to provide broad, fast brushstrokes. Our shorter tables tend to deliver cryptic results designed to shock the reader's creativity into filling in the gaps, whereas the longer tables are unusably vast for easy random generation, being designed to shock the reader's creativity into operation by presenting a sea of possibilities. 21.99  16.49

Old-School Essentials Classic Fantasy: Rules Tome - Can you make B/X D&D better than the Labyrinth Lord interpretation? Apparently, the answer is yes.
A Complete Game All in One Book
This book contains everything a referee needs:  the complete game rules, full guidelines for creating and running adventures, 7 fantastic character classes, full equipment lists, over 100 classic spells, over 200 fearsome monsters, and over 150 wondrous magic items. Simple rules let imagination and fast-paced action take the spotlight. Clear, modern presentation makes the game easy to learn and quick to reference. Compatible with decades of classic adventures and supplements.
20.00  15.00 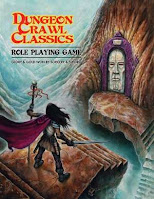 Dungeon Crawl Classics RPG - I haven't run it in years, reading the DCC rues for the first time was similar to reading the AD&D DMG for the first time - magical.
You’re no hero.
You’re an adventurer: a reaver, a cutpurse, a heathen-slayer, a tight-lipped warlock guarding long-dead secrets. You seek gold and glory, winning it with sword and spell, caked in the blood and filth of the weak, the dark, the demons, and the vanquished. There are treasures to be won deep underneath, and you shall have them.
Return to the glory days of fantasy with the Dungeon Crawl Classics Role-Playing Game. Adventure as 1974 intended, with modern rules grounded in the origins of sword & sorcery. Fast play, cryptic secrets, and a mysterious past await you: turn the page…
DCC RPG is a fast-paced, open-feeling rules set allowing for epic game experiences without unnecessary tethers. It uses modern game-play while paying homage to the origins of role-playing and the fun that it inspired.  24.99  18.74

Torchlight Issue #1 - Not only am I very proud of this release, as I type this it is sitting at #88 on the Christmas in July Sales Ranking. Woot!
This is the First, full-sized issue of the Torchlight Zine for Swords & Wizardry Complete, Swords & Wizardry Light, and Swords & Wizardry Continual Light. Inside the virtual covers you will find: Magical Potions for SWL, Social Combat Rules, Torchbearers for Swords & Wizardry, Keep on the Wildlands (a first-level adventure by James Spahn), More Monsters for SWL, Alternate Thief Abilities, and Summon Familiar Spell & Critters for SWL/SWCL.  3.00  2.55
The Tavern is supported by readers like you. The easiest way to support The Tavern is to shop via our affiliate links. DTRPG, Amazon, and Humble Bundle are affiliate programs that support The Tavern.  You can catch the daily Tavern Chat podcast on Anchor, YouTube,  or wherever you listen to your podcast collection. - Tenkar
Posted by Tenkar at 3:16 PM

Email ThisBlogThis!Share to TwitterShare to FacebookShare to Pinterest
Labels: christmas in july, OSR