LaNasa - Playing with the OSR Since at Least October, 2020

For those that think the current TSR drama is something new, I picked this gem from The Tavern vaults (original post here from October 17th, 2020) 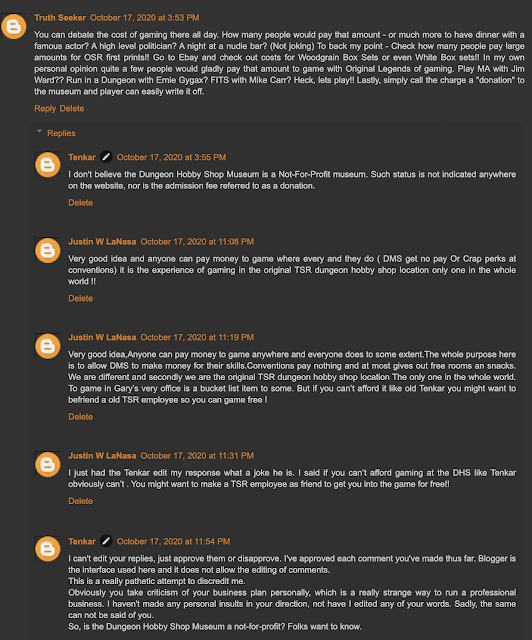 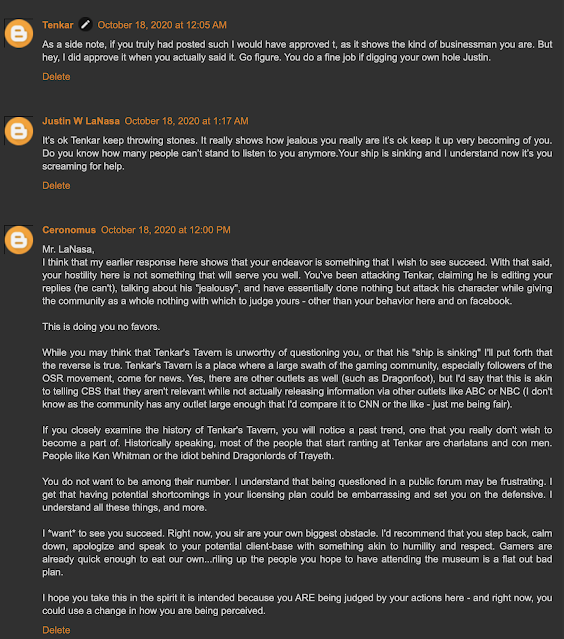 Notice that LaNasa never answers the question about whether or not the museum is a Not-For-Profit. He does say that the donation idea is a "very good idea".

Very good idea,Anyone can pay money to game anywhere and everyone does to some extent.The whole purpose here is to allow DMS to make money for their skills.Conventions pay nothing and at most gives out free rooms an snacks. We are different and secondly we are the original TSR dungeon hobby shop location The only one in the whole world. To game in Gary’s very office is a bucket list item to some. But if you can’t afford it like old Tenkar you might want to befriend a old TSR employee so you can game free !

He lets the reader draw their own conclusions, much like he's doing with TSR right now. He throws out just enough that the reader unwittingly fills in the blanks.

I just had the Tenkar edit my response what a joke he is. I said if you can’t afford gaming at the DHS like Tenkar obviously can’t . You might want to make a TSR employee as friend to get you into the game for free!!

Blogger does not give that option to site owners, but I could delete his comments. Obviously, I did neither. But the accusation is important along with the mocking of yours truly because it's simply a distraction from the question being asked: Is the Dungeon Hobby Shop Museum a not-for-profit?

I ask the question yet again. His response is pure classic LaNasa (as we've recently seen on social media as TSR and/or Dungeon Hobby Shop Museum):

It’s ok Tenkar keep throwing stones. It really shows how jealous you really are it’s ok keep it up very becoming of you. Do you know how many people can’t stand to listen to you anymore.Your ship is sinking and I understand now it’s you screaming for help.

Avoidance. Distraction. Insults. But never answers. It's literally LaNasa's Method of Operation. I'm not making it up. Ignore the insults, the labels, and the dismissiveness he has shown to the gaming community over the past two weeks and look for what's missing. Answers. Simply Answers. Justin has none, so he throws up some flack to rile people up and fight amongst themselves and they forget what they were there for initially.

The Emperor has no clothes. That is the simple answer.

The arguing back on forth on whether or not TSR is toxic is a distraction from the simple fact that TSR has nothing to offer but rebranded Dollar Tree Dice, empty promises, and abandoned TMs

Note: Rezoning of the Museum's location is on the agenda for the Lake Geneva City council at 6 PM CDT. You can view the meeting virtually:

CITY HALL WILL BE OPEN TO THE PUBLIC DURING ALL MEETINGS. THE CITY OF LAKE GENEVA IS HOLDING

ALL MEETINGS VIRTUALLY AS WELL AS IN PERSON. IF YOU WISH TO LISTEN OR WATCH THE MEETING YOU

MAY DO SO BY USING THE FOLLOWING:

1. Links to the City of Lake Geneva’s live video stream can be found at www.cityoflakegeneva.com/video