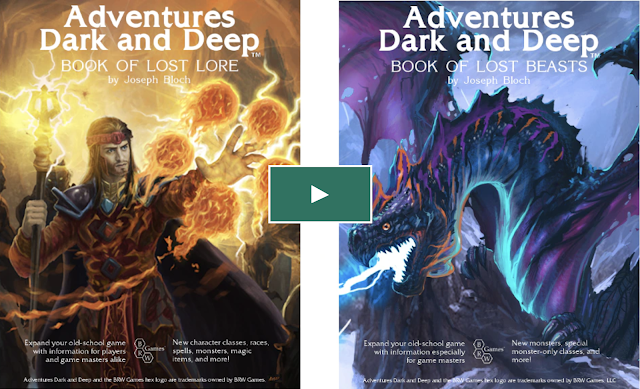 I'm a big fan of BRW Games / AKA Joe Bloch / AKA The Greyhawk Grognard. Joe has been putting out quality OSR releases for years, not the least of which is his Adventures Dark and Deep, a what-if AD&D 2e retro-clone. Seriously good stuff.

The idea of these two new books is to give people who are already happy with their 1st Edition, C&C, S&W, LL, or similar games to be able to pick and choose from a wide variety of options and plug them in to their existing game as they want. There are new classes like the bard, jester, skald, blackguard, savant, mystic, and mountebank. Tons of new spells and magic items. An alternative combat system, and two alternative treasure systems. A skill system that's amazingly versatile and so much better than "Non-Weapon Proficiencies", and a system for social encounters. Rules for weather and much, much more. Everything is modular, so you can pick and choose which elements you want to include in your game.

If this sounds familiar, the very first RPG book I did nine years ago was A Curious Volume of Forgotten Lore, which had a lot of the "new stuff" that is now included in my game Adventures Dark and Deep; new classes, races, spells, etc. All of that was based on Gary Gygax's announced plans for his own expansion of AD&D in the mid-1980's. But over the years Adventures Dark and Deep has grown beyond the original scope, much more material has been added in various other places, errata have been made, and I've gotten a much better feel for what folks think will be useful. These new books have all that and more.

My intention is to include enough brand-new material to make it worthwhile for people who already have the original book to add these to their collection; each of the two books is as long as the original was, so we're literally talking double the amount of stuff in the original. But it's also intended to be incredibly useful and valuable to people who have never heard of Adventures Dark and Deep, and just want to have a bunch of alternatives at their fingertips to add to their old-school fantasy games.