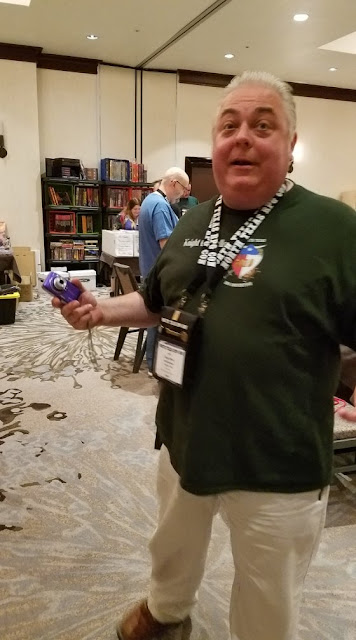 Yesterday, Doug Rhea underwent surgery after his intestines burst. He was already hospitalized and surgery had been scheduled prior. Doug's surgery went well and some tumors were removed but he will require further hospitalization and bed rest. He will not be at NTRPG Con this June.

Doug was diagnosed with Stage 4 Colon Cancer approximately 5 years ago and has already survived past expectations and beaten the odds. Doug is a stubborn SOB and will not go quietly into the night. God bless him and his family in these tough and stressful times. If you can spare some prayers or positive thoughts for Doug and his family, I'm sure it would be appreciated. The following is from Michael "Bad Mike" Badolato and is borrowed from the NTRPG Con Facebook Page with kind permission. Tenkar

NTRPG con is family. It has been so since the beginning, and it is run by family. It’s no coincidence most of the people running the con are brothers, sons, grandkids, etc. You guys are all part of that family…you took a chance on us when we started this thing in a La Quinta with 50 people, and here we are thirteen years later known as one of the best RPG cons in the south, with a guest list some bigger cons envy. This is mostly due to Doug Rhea, who is an unstoppable force when it comes to getting things done, fearless when it comes to cold-calling guys like Larry Elmore to see if they will show up to our little con in Texas, willing to finance a con that breaks even at best, uncompromising on making sure his high standards are met every year. Which makes this announcement damn difficult…Doug won’t be able to attend NTRPG Con this year.

So it’s time to let you guys in on some family business. Doug has been very sick the past few months due to intestinal blockages because of the tumors inside him. Sick enough that he finally underwent surgery Tuesday to alleviate the blockages, take out parts of his intestine, and remove some of the tumors that have been growing in Doug for the past several years. For those that don’t know, Doug was diagnosed with Stage IV colon cancer four years ago and given only a few years to live. Because of bi-weekly chemo, he’s been able to beat the odds. By sheer toughness and willpower alone he’s been able to plow through many health issues the past couple of years, most of which he hasn’t told anyone about since he’s a very private person. However, the present situation progressed to the point where hospitalization and surgery were inevitable, it’s just a damn shame it had to happen the week right before his favorite time of the year, NTRPG con.

The operation he underwent Tuesday was a major surgery that took six hours. Many things were removed and the doctor who did the surgery said it was “miraculous” how well it went considering the circumstances. We are very hopeful this surgery will alleviate much of the discomfort and pain he’s had recently and improve his quality of life in the long run. In the short term, however, things are rough. Doug still has not woken up after his surgery, and has a high fever (a sign of infection). Because of this, we are looking at an extended hospital stay and then bed rest at home for probably two months at least. Even if he was awake, he would be in no shape with his compromised immune system to attend the con or meet with anyone in person. We hope he wakes up and makes it home soon so he can watch some of the live feed from there, but we will also set something up at the con where you can tape personal well-wishes to Doug that he can watch later when he recovers. I know from talking to him the personal messages he’s gotten the last few years mean a lot to him. If you feel inclined, prayers and positive thoughts are also welcome, not just for him, but for his son, grandkids, and wife.

As for the con, we will get by in 2021. Gary Oliver, David Rhea, and I can run this thing in our sleep, and we will still give you the best small con game experience you’ve had in, well, the past two years.  Some of the bells and whistles might be missing due to this happening with such short notice, but all we ask is that you take it in stride and have a great time gaming and saying hello to people you haven’t seen or sat at a table within two years. Seriously, this is what will make Doug the happiest, knowing everyone here is having a blast. I know he would rather be here running his games and hanging out with us personally, but I’m hopeful this surgery will extend the time he has to keep at this convention thing for many more years, and he’ll be able to personally meet and greet everyone next year. His son David will be running all of Doug’s events, so be sure and tell him how much his father means to all of us when you see him at the con.

For this year, if you have any questions, one of us should be able to help you out. Yes everything is not going to be able to be run with the ruthless efficiency Doug usually brings to this. Be patient with us, and remember where we were last year and how much better this year is looking…smell a flower, have a taco, and be chill. I know a lot of you are saying “What can I do to help?”  The most useful thing you can do, if you are a con veteran (you know who you are), is to take it on yourself to help out a newbie or someone having an issue. Take that guy or gal with the confused expression aside and ask if you can help. Clean that table off that the staff hasn’t gotten to yet. Make sure someone looking for a game to play in knows what to do or bring them to a game yourself. Seriously, half the time a question pops up on the FB page it’s already been answered by con veterans before I even have time to reply myself. Your help this year will be greatly appreciated!

We will answer questions best we can on the NTRPG con page, but understand, everything I’ve just said is pretty much the extent of our knowledge. We will keep everyone informed to the best of our ability here on the page as news develops, please don’t inundate us with private messages because, well, this is all we know right now. Thanks in advance for your help, and for being a part of our lives and NTRPG con the past 13 years.