Flurry of Pre-Con Activity (Best Laid Plans and All) 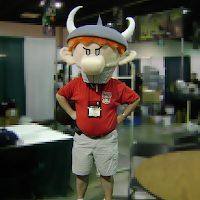 Right off the bat I have to admit I can be kind of an idiot at times, well "idiot" might be a bit rough, but I sometimes have issues conceptualizing time. Usually this manifests by me having issues distinguishing between September and August, like which month is the 8th or 9th month of the year.

It's an odd thing to be certain, and it makes me feel like an idiot, but usually, usually this is the extent of this temporal-dyslexia.

For some reason, even though I carry a calendar (on my phone) and keep a huge physical calendar next to my bed (more a financial tool for me), I was laboring under the impression that North Texas RPG Con was this next weekend, instead of two weekends from now.

Now I'm attending as a participant and not a GM, so my workload is much less than my norm, but there are always a few things I have to prep for before a convention. I'm used to travelling to a con, and since NTRPG is a scant three hour drive away, space isn't as big of a deal, but I have to plan on my packing list anyway.

What games am I scheduled to play and what pick-up games would I like to play? Even though I almost never get in a pick-up game, I like to plan and hope. While I have a great tablet and PDFs of most of my game systems, I really want printed gamebooks at the table. To this end I have a bunch of rulebooks printed to roughly Digest size....and I have extra full-size 1st Edition books I can bring. What I'd like to do is standardize my "small print" library and have an actual physical portable game library I can bring with me to the con.... 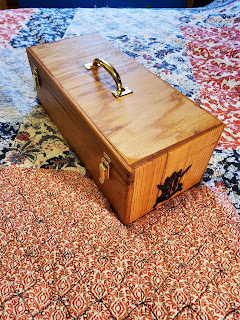 ....and I'll add it to the list. I've got a list of several building projects that just gets longer and longer, but since there are things I want to bring and use at a/the con, the weeks before the convention tend to get more and more hectic. Losing a week to my idiocy isn't a good thing......but finding a week (well, realizing it wasn't lost in the first place) is a bit of a blessing.

Due to work issues I have more time than usual and I've been ticking items off of my build list and working on my skills. If not for the fact I'm a little behind due to the weather (It's been raining off & on here all week) I'd be able to show pics of my GM Thank You gifts I mentioned last week, but obviously they aren't done yet. 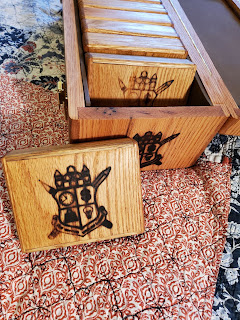 What I did finish though are a few boxes for a small Whisky (and Whiskey) tasting event Erik and I are hosting at the con (more like his event I'm sponsoring.....it's a story unto itself....maybe next weekend?). The main box is heavy-assed oak, way overbuilt.....because I used what was on hand...mostly because I screwed up the dimensions on the first attempt of the box. It happens.....I made the main box after making the boxes that go inside and I wrote down the wrong measurements.Inside the main box are a series of 11 (10 plus a spare) smaller boxes made of solid oak. These have embedded magnets to keep them closed, but when you open them up.... 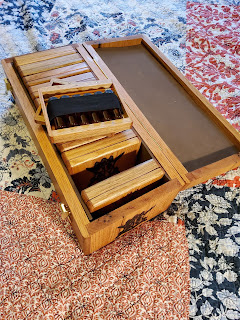 There are six 45 dram (roughly 1/3 of a 2oz shot) vials, a pencil, and some notecards. These vials will hold the Whisky/Whiskey for the tasting.
I still need to replace the foam liner seen in the pics with leather because I do not care for the foam. It works in some applications, but not for this one, in my opinion.
Now I'm NOT being self-depreciating or overly critical, but these boxes are not bad....ok even, but an essential part in my own personal learning curve. I've learned so much just from this one project.....
....that I've already applied to the Thank You gifts....which helped teach me a few things that lead me on to the next project, which I should have at the con.
I'm not sure I'm quite to the point where I can make my travelling library to the level I'd like it, but I might be able to scratch another item of my convention build list.....for next year (unless the weather greatly improves...then probably still the next con).
Luckily there is always the next year and the next convention (assuming I don't go to a different convention.....Long Con perhaps....in the meantime) for new projects. I might not be good at figuring out timescales sometimes, but a year is manageable.
This week I have a couple of loose ends (build projects) to wrap up, games to pack up, dice to not forget, and inevitably more ideas to add to my build list.....

Posted by Christopher Stogdill at 12:19 PM

Email ThisBlogThis!Share to TwitterShare to FacebookShare to Pinterest
Labels: convention, not Erik, projects