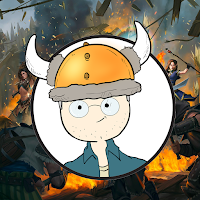 Confession time: Like a lot of grown-ass men, I'm not a lot of fun when I'm not feeling well and Friday I got my 2nd Covid-19 shot. The side effects are there, I am cognizant of this, and I'll try not to be a whiny bitch this week.
That being said, I'm mildly annoyed with the community after my post a month ago about computer RPG games. Since this is largely an OSR community here at the Tavern I get it though.......this will make sense in a hot minute.
So I mentioned that I've bought Baldur's Gate a couple times now, most recently on Xbox One. I've played it for maybe an hour and I'll just say it: I think the Xbox port sucks major donkey dick. I think some of my veteran brothers know that "major donkey dick" is a quantifiable measurement. I was an idiot and bought this when it 1st came out and now at the price of $18 for BG1 & BG2......I'm not sure it's worthwhile at that price. Now maybe with a keyboard and mouse.....but with a controller? Nope.
Since I knew I was likely to be sick for a couple days I figured I'd hit up the Gamestop to see what I could find and I came across a copy of the "Definitive Edition" of Pathfinder Kingmaker. OK, so it isn't D&D, much less anything close to OSR, BUT it is a surprisingly good table-top RPG on a console. I'm really digging it and finding it so much more enjoyable than Baldur's Gate on the Xbox.
Now, of course the interface is not perfect. There are some occasional things, like group movement changing where I'm trying to figure out what button combo I accidentally pressed to change things. Overall though, it's freaking fantastic. I love, love, LOVE how you can basically create a bunch of hotkeys for each character. Want to use a spell, ability, or even have some equipment at your virtual fingertips....easy-peasy.
After five hours of gameplay....and by five I mean probably more like 25 since time freaking flies while gaming online.....I have lost count of the number of times I was thinking, "I wish these guys would use this engine on Baldur's Gate." Many times I forgot I was playing Pathfinder and the ruleset stuff wasn't as big of a deal. I don't know the Pathfinder rules and my experience in D&D 3.5 was limited, so the rules weren't really that big of a barrier for me. 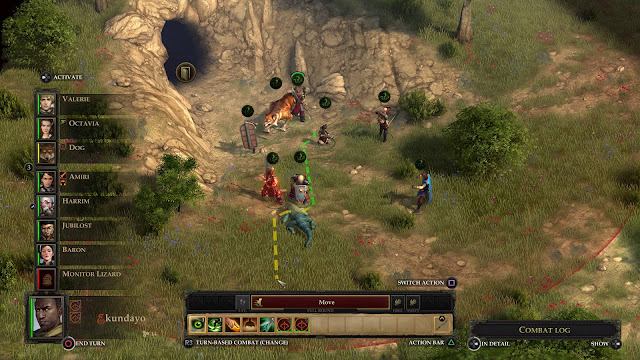 Yes, I did have to spend much more time reading things to figure out ruleset stuff, but again this is where the interface shined. If I needed a bit of an info-dump it was usually a button click away.
Now I'm only in the beginning of the game with level 4 PCs. I know there is going to be some kingdom-building "stuff" in the game I may or may not like. I was thinking how much it'd suck if I didn't like this aspect of the game, but after looking at the in-game options I can have that stuff automated and concentrate on the adventuring aspects. Actually, there are a TON of options as far as gameplay goes, much more than just tweaking difficulty settings.
The biggest is that you can have real-time combat and traditional turn-based, so you can be more like a "regular" computer game and a "regular" Pathfinder table-top game. Feel free to let the AI run the other PCs and concentrate on your one (main) guy. I haven't tried the AI option yet and try to control everything on my own, which takes up more time. One HUGE improvement over Baldur's Gate is that you can toggle on and off PC auto following, and you can tweak your party formation really easy.
One think I HATED with BG was pausing the game so I could direct each PC to take a specific action and then when you un-pause they do that one thing and then go all Leroy Jenkins on your ass. Ugh. This means I'm always having to pause and un-pause to keep my guys from running off stupid (even when I've tweaked the AI). While I can pause the Pathfinder Kingmaker game, when I do it's usually by accident. Since I'm playing turn-based those PCs move when I tell them to (in combat) and they will keep in formation when out of combat. Unlink the PC movement and I can put each PC where I want and *gasp* THEY STAY THERE!
Clearly I'm enjoying this game and I wanted to share this with the other patrons because....well because this is a game I would have normally passed on by and I'm willing to bet the average OSR-focused Tavern patron would as well. Honestly the biggest reason I picked it up was the fact that Deep Silver worked on it and I've liked every Deep Silver game I've played. Just consider this post a PSA of sorts.
Posted by Christopher Stogdill at 1:01 AM