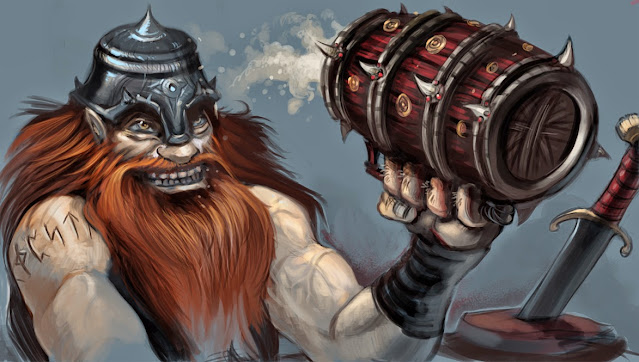 As there has been an interest in a recap of the Tenkar Tavern's YouTube Channel for the blog-side, this will be the first of what should be a weekly roundup of seven days worth of YouTube episodes. Note, these are not transcripts, merely a paragraph or so summary, and if you desire a deeper delve, the relevant video episode will be linked below. Hopefully, the information included herein will suffice for some. If you do watch any of the videos, I kindly ask that you subscribe to the channel. It helps more than your know. - Tenkar

"According to Dave Arneson's Corner of the Table newsletter, Vol. III, #4"

"There will be a medevil "BRAUNSTEIN" April 17, 1971 at the home of David Arneson from 1500 hrs to 2400 hrs with refreshments being available on the usual basis. Players may come at any time and any number are welcome to attend what should prove to be an exciting time.  It will feature mythical creatures and a poker game under the Troll's bridge between sunup and sundown."

There have been people lining up and taking sides for years, as to whether Dungeons & Dragons owes more to Dave than to Gary, or visa-versa. My feeling is that without either, we'd never have the game, industry, or hobby that we now have. Dave had the imagination and Gary had the vision, and without both, we wouldn't have Dungeons & Dragons.

So, Ken Whitman, AKA Whit Whitman, wrote and directed a movie called The Whittler, but of course he left his name off of all promotional material. Apparently written back in 2005, there was a copyright claim filed by Ed Kramer of Dragon Con fame (and a former roommate of Ken's)

Kenny has been pushing his "creative move maker" side for a while now. With The Whittler, starring some former pro wrestler I never heard of, Kenny hit the Big Time. Sort of. Initially, The Whittler was available on Amazon video for purchase or rental, but it appears the copyright claim by Ed Kramer (a convicted child molester) led to the removal of said movie from the Amazon store.

It should be noted that in the case of The Whittler Movie Premiere in Wise Virginia Kickstarter, only $525 of the 2,576 raised (of the $2500 goal) can be accounted for from the public pledges.

Bad Mike (of NTRPG Con Fame) and Tenkar are joined by Ben Barsh of Pacesetter Games. We talk in general about Kickstarters (do's and don'ts), specifically about Pacesetter's Endless Encounters: Dungeons a 5th Edition & B/X Adventure Generator, and also do some quick summaries of the latest Far West and Ken "Whit" Whitman drama.

I talk about the history of media in the digital age in the world of OSR Gaming, and specifically address how I (Tenkar) have participated in such over the years, my participation in forums, my inspiration to start The Tavern's Blog, my history of podcasting and why I kicked off the Tavern Chat solo podcast and later why I started  The Tavern's YouTube Channel.

Thus this blogpost. My attempt, of sorts, to close the circle, and ensure that all of the content from the spoken side, is available on the written side. Definitely not word for word, but at least to the point that you have enough of a summary to decide if you want to listen to the relevant episode. If not, you have the elevator pitch of a summary ;)

Live from Connecticut (Joe) and The Poconos of NE PA (Tenkar). Danke the Dachshund makes an appearance. They talk about Critical Role and similar types of shows, and argue over whether such shows bring new players into the gaming hobby, if the expectations the new players come in with are accurate, and more. Very much a sandbox-styled episode.

Rach and I are back with another weekly livestream, this time from The Poconos. We discuss the importance of weekend getaways for one's mental health, the emotions I felt simply after shopping at Walmart, the challenges one faces when on vacation and trying to maintain good eating and exercise habits, and more.

Yep, we use "adult language" on The Tavern's Youtube Channel. Go figure ;)