Deal of the Day - Against the Darkmaster Core Rules 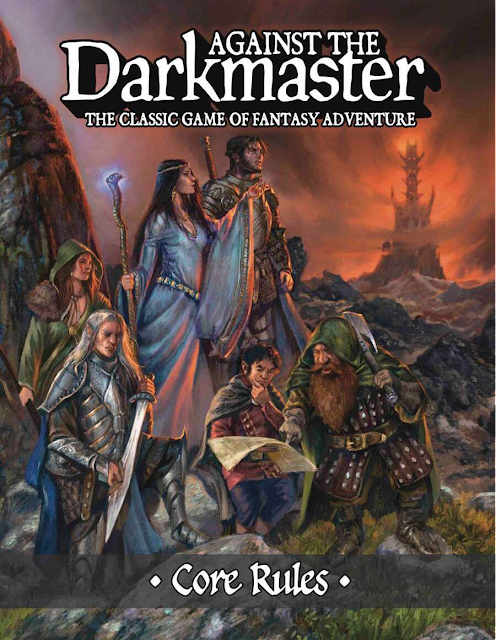 Against the Darkmaster (abbreviated in VsD throughout) is a tabletop pen & paper role-playing game of high fantasy, epic adventures, eldritch magic, and heavy-metal combat.

What is Against the Darkmaster inspired from? As we mentioned above, VsD is an epic fantasy game first of all. As such, it draws its main inspiration from the classic works of the masters of the genre, from J.R.R. Tolkien to Ursula K. Le Guin, passing through the two Terrys (Brooks and Goodkind) and their followers, Weis & Hickman, Jordan, and Williams. Anyhow, these are only the original sources of inspiration.

Against the Darkmaster is also inspired by the great fantasy movies of the ‘70s, ‘80s and ‘90s and from the sword & sorcery genre. Think of The Lord of The Rings cartoon from Ralph Bakshi. Think of the cheap ‘80s barbarian movies. Think of the heartbreaker movies a whole generation was raised to: Dragonslayer, Krull, Labyrinth, Clash of the Titans, Legend.

Finally, think of VsD as a mix of all the above as seen through the eyes of a heavy metal music fan. And when we say “heavy metal”, we mean the original genre. The music of Malmsteen, Dio, Black Sabbath, Blind Guardian, Manowar, Iron Maiden. Lyrics and music bringing to life the very clash of steel versus steel, the power of elemental fire and thunder. These are all ingredients you will find in generous doses in the VsD recipe.

Why is it abbreviated VsD?  I'm guessing the original is in Italian, and that is the abbreviation from Italian. I could be wrong, so I'll be happy to correct it.

But really, WHAT IS Against the Darkmaster? For all intents and purposes, it is a clone of the Rolemaster rules. It never comes out and says to, but just looking at the cover, you can see the similarities.

I no longer desire to play rules as fiddly as Rolemaster, but for those that do, Against the Darkmaster Core Rules may be an excellent option. Normally 20 bucks in PDF, until tomorrow morning at 11 am Eastern, the rules are on sale for 10 bucks. Remember, the Quickstart Rules linked above are free.

Email ThisBlogThis!Share to TwitterShare to FacebookShare to Pinterest
Labels: against the dark master, deal of the day, rolemaster