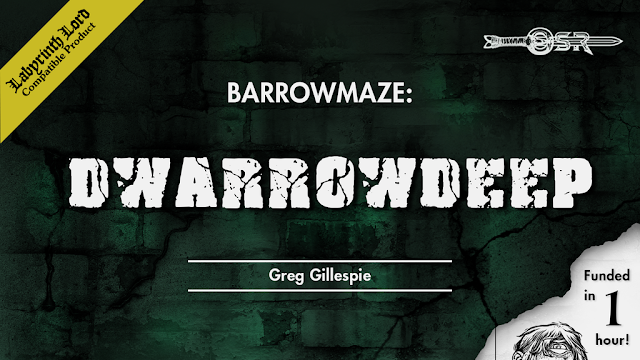 Barrowmaze is probably the gold standard of megadungeons. It broke new grounds when it was published and established Greg Gillespie as one of the OSR's premier adventure creators, as he followed Barrowmaze with Barrowmaze II (which were then joined in Barrowmaze Complete) Highfell, & The Forbidden Caverns of the Archaia.

Today, Greg launched the Kickstarter for Barrowmaze: Dwarrowdeep (OSR and 5E). It funded in an hour and has already surpassed 275 backers. I should know, I'm one of them ;)

Tonight at 8 PM Eastern, Greg will be the guest of Bad Mike & I on the Talking Crit Livestream. Join us and pepper Greg with questions. Or watch later and simply listen to the answers to the questions of others. Oh, and events in the hobby we all love. We ALWAYS touch upon such news ;)

This Kickstarter campaign is designed to support the creation of a new megadungeon adventure for the Old School Renaissance and the Fifth Edition of the World's Most Popular Role-Playing Game. Dwarrowdeep represents the fourth in a massive six-part megadungeon adventure series never before undertaken in the history of fantasy role-playing games.

The OSR Labyrinth Lord edition can be played with any TSR rule-set from the 70s/80s/90s, or inspired by them, such as Original Edition, B/X, First or Second Edition, OSRIC, Old School Essentials, or Swords and Wizardry without conversion. The adventure is designed to support low-to-high level play within a medieval fantasy campaign lasting months and years.

I estimate the final draft to be between 260-290 pages and approximately 500-600 encounter areas. If you are familiar with Barrowmaze Complete, that project was 259 pages in a two-column format (cover to cover). The Forbidden Caverns of Archaia my follow-up project, was 293 pages. Like my other megadungeons, Dwarrowdeep will provide PDF poster maps in both black and Old School blue.

Dwarrowdeep begins with a gazetteer that outlines the region in which the adventure takes place. This includes a cultural history of the dwarves as well as detailing the town of Hamelet - the base of operations for the campaign. The dungeon proper will be levelled in a traditional style, albeit with twists and surprises. You can expect new spells and magic items, special monsters, pregenerated characters, new races, and rival adventuring parties. Dwarrowdeep merges my own unique vision (one that has never been realized in a dwarven-themed adventure) with inspiration drawn from J.R.R. Tolkien and classic adventures like Shrine of the Kuo-Toa and The Night Below.

You can catch the daily Tavern Chat podcast on Anchor, YouTube,
or wherever you listen to your podcast collection.
Posted by Tenkar at 6:56 PM