While I'm fairly disappointed with this year's DTRPG GM's Day Sale, as the bundles pretty much suck, and the majority of the titles on sale are only discounted 10%, there are a number of pics that are 40% off for the sale. The picks below are all 40% off.

Here's the link to the Swords & Wizardry picks. My highlighted picks are far from exhaustive.

Tome of Adventure Design - I can't say enough in praise of ToAD. I own multiple physical copies - The Tome of Adventure Design is organized as a series of "books," each one providing resources at every step of the way. The vast majority of the content of each book is made up of random generation tables that we created over a quarter of a century (sigh) for our own use. It should be said upfront that these are tables for deep design - in other words, most of them are too long, and contain too many unusual or contradictory entries, for use on the spot at the gaming table. There are already many excellent books of tables for use on the fly; the tables in these books are different. They work best as a tool for preparation beforehand, providing relatively vast creative resources for browsing and gathering, rather than quick-use tables designed to provide broad, fast brushstrokes. Our shorter tables tend to deliver cryptic results designed to shock the reader's creativity into filling in the gaps, whereas the longer tables are unusably vast for easy random generation, being designed to shock the reader's creativity into operation by presenting a sea of possibilities. 21.99 13.19

Dark Places & Demogorgons - Survive This!! - Core Rule Book - Stranger Things for the OSR - In Dark Places & Demogorgons, you play as high school students during the early 1980s. The town you live in has had a rash of disappearances and strange happenings. The adults seem lost as to what to do, the police are as clueless as ever and aren’t helping and Reverend Phillips is on another witch-hunt. It’s up to you and your friends to figure out what’s going on and stop it from happening again! 9.99 5.99 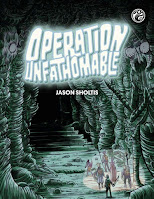 Operation Unfathomable - I'm dying to run this one day - OPERATION UNFATHOMABLE is a 108-page, internally-consistent, gonzo funhouse module for Swords & Wizardry that runs like a subterranean wilderness trek instead of a “down the 10-foot hall and kick in a door” affair. There are random elements aplenty to keep GMs guessing as well as players. No balanced encounters to be found here, but the clever setup allows low-level characters to drop into the dungeon “deep end” and still have a chance of making it out alive—if they’re smart and wary. 12.00 7.20

Crypts and Things Remastered - Newt did a great job with this Swords & Sorcery hack of the S&W rules - Be a wild Barbarian, a deadly Fighter, a soul-torn Sorcerer or a sword sharp canny Thief, fighting evil tyrants and foul demons in a world rapidly dying and heading towards its final nemesis. Crypts and Things (C&T) is a Swords and Sorcery Roleplaying game based upon the Old School Rules of the 70s/80s. It also draws upon the British fantasy games and game-books of that period to bring a distinctly dark and dangerous feel to the game. It was originally released back in early 2012 and after a highly successful Kickstarter in 2015 it returns in a Remastered edition, with revised and expanded content and entirely new art by David M. Wright. 14.42 8.65 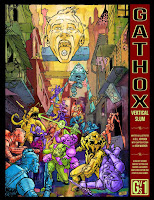 Gathox Vertical Slum - I like the cover and the premise. Snagged! -Welcome to Gathox Vertical Slum, a far-out, gonzo science fantasy campaign setting for Swords & Wizardry White Box Edition and other classic tabletop role-playing games. Aliens, mutants, spellslingers, and hardened criminals struggle for dominance in a lawless city built upon the back of a wandering, world-hopping godling. Inside this tome, you’ll find:* A fully mapped and fleshed out Vertical Slum, stuffed to the gills with greedy factions, hook-laden NPCs, and seedy locations.* A new gangland system for running domain-level games at level 1.* 43 fully illustrated strange and inimical monsters to spring on unsuspecting players.* New classes, skills, ability checks, hirelings, and gear for players to work their will across the mean streets of the Great Spire.* A vertical dungeon introductory adventure to test the skills and resourcefulness of new and seasoned players alike. 9.99 5.99 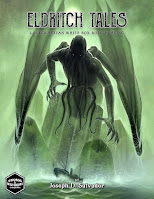 Eldritch Tales: Lovecraftian White Box Role-Playing - There is much within that I want to put into my next S&W campaign - Eldritch Tales: Lovecraftian White Box Role-Playing in an OSR rule set with its roots in the Original version of the world's favorite RPG, but instead of exploring musty dungeons, characters in Eldritch Tales investigate Mythos horrors in the 1920s! The setting and background are based on the cosmic horror tales of Howard Phillips Lovecraft and other members of his writing circle. Within the pages of Eldritch Tales you will find four character classes representing many classic pulp archetypes, occupations, rules for insanity, spells, monsters, esoteric tomes, artifacts, a starting scenario, and setting material, as well as advice on using Eldritch Tales with other White Box games. This game is compatible with Swords & Wizardry White Box and other OSR games. 6.99 4.19

You can catch the daily Tavern Chat podcast on Anchor, YouTube,
or wherever you listen to your podcast collection.
Posted by Tenkar at 5:58 PM