Gangbusters B/X Edition is on Sale for 99 Cents in PDF - Grab it Now! 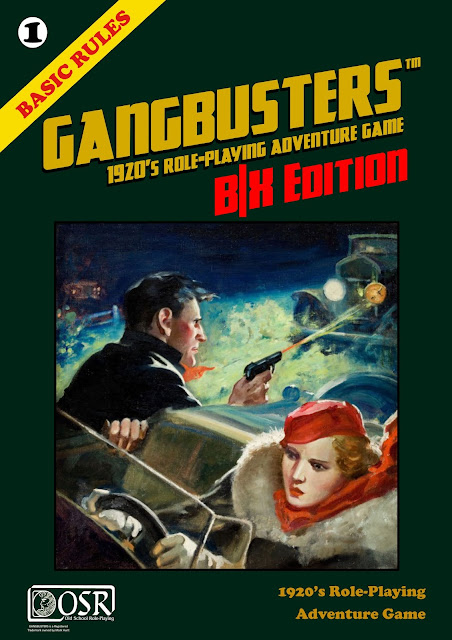 Earlier tonight, Glen Halstrom and I had Mark Hunt as our guest on the Dungeons, Dragons, & Discourse LiveStream. (podcast version is here)Among the many games Mark has written and published, perhaps one stands out the most.

Gangbusters B/X the Roleplaying Game is set during the Roaring Twenties and Dirty Thirties. It has all the usual trappings of the period: Prohibition, mob bosses, Tommy gun-toting thugs, speakeasies, big hats, big cars, big personalities, swanky gin joints, illicit booze and crooked people out to make a quick dime, and more, but what the game is about is rather simple. It is at its core just a good old fashion game of Cops and Robbers. This is because it is set during a time when America produced some of its most notorious and legendary figures.  John Dillinger, ‘Scarface’ Al Capone, ‘Pretty Boy’ Floyd, ‘Baby Face’ Nelson, ‘Ma’ Barker, Bonnie & Clyde, Eliot Ness and the ‘Untouchables’, J. Edgar Hoover, Sam Spade, Philip Marlowe, and a host of others.   Whether you join the in the crusade to stamp out lawlessness or join in on the crime spree that is gripping America is up to you.

Based on the Original Gangbusters from the ’80s created by Rick Krebs this edition is adapted to use the B/X game engine.  But instead of exploring musty dungeons, characters in Gangbusters investigate crime, run speakeasies, rob banks, expose corruption, capture murders or try to get away with it all.

Now you can relive the adventures and exploits of these daring men and women with GANGBUSTERS™ 1920s role-playing adventure game.

You can catch the daily Tavern Chat podcast on Anchor, YouTube,
or wherever you listen to your podcast collection.
Posted by Tenkar at 10:02 PM