Kickstarter - The Lost Triptych: A 5e and B/X RPG Campaign! 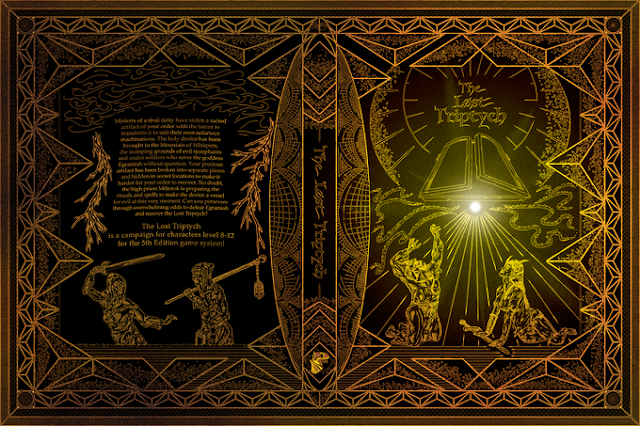 Pacesetter Games has a very nice Kickstarter record. Thom Wilson has a deep & full library of quality OSR releases behind him. Put them together and you get The Lost Triptych for B/X and 5e.

Bad Mike and I sat down with Thom last night on the Talking Crit podcast and it was a blast, and we got some insights into how The Lost Triptych came to be as a collaboration between the two companies.

Minions of a rival deity have stolen a sacred artifact of your order with the intent to transform it to suit their own nefarious machinations. They have brought the holy device to the Mountain of Whispers, the stomping grounds of evil sycophants and zealot soldiers who serve the goddess Egramish without question. Your precious artifact has been broken into separate pieces and hidden in secret locations to make it harder for your order to recover. No doubt, the high priest Miltotok is preparing the rituals and spells to make the device a vessel for evil at this very moment.

Is your faith strong enough to endure the evil horrors of the mountain, where your gods can barely be felt? Can you persevere through overwhelming odds to defeat Egramish and recover the Lost Triptych?

The Lost Triptych is a campaign for characters level 8-12 for the 5th Edition or B/X game systems!

The Lost Triptych is a high-level adventure that pits seasoned adventurers against the dark forces of an evil god whose servants are willing to sacrifice themselves and others to bring about the end of peace and prosperity. The foes that the characters will face are quite deadly – powerful spellcasters, ancient undead, and ruthless spies will challenge the group at every turn. This is no simple adventure, by any means!

This adventure can be dropped into any world of the game master’s choosing. The only location-specific element of the story is the Mountain of Whispers, which can be placed in any mountain range within the game master’s campaign world. Characters will start their journey at the bottom of the mountain, crawl through its dark depths, and finally arrive at the fortress peak to confront the minions of the evil god and her thieving sycophants.

If none of the characters is Lawful or (especially) a Cleric, the story can be adjusted to fit the group’s deities or alignments. The story plays out best if a conflict between good (the characters) and evil (followers of the rival goddess) exists. Also, the opposing deity can be adjusted to fit the game master’s world as needed. The story suggests using the evil goddess Egramish if the game master has no other viable antagonist in mind. If Egramish is used in this adventure, it will be assumed that the central character or characters (those affiliated with the Lawful deity) will know of the goddess as a long-standing rival deity and her constant attempts to overthrow their own god.

This book will include: