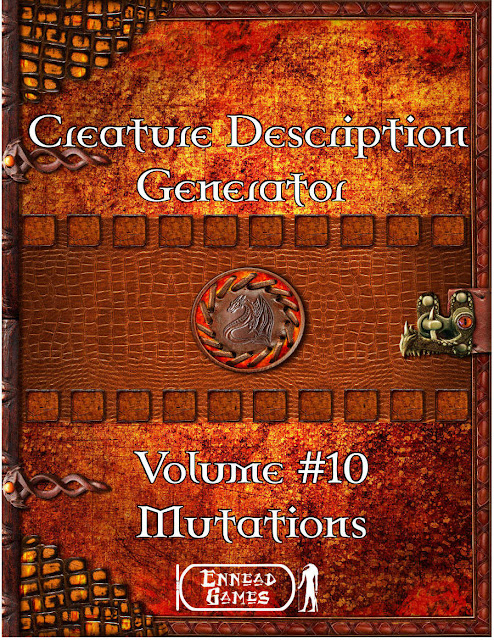 As I work on my upcoming campaign, one thing that sticks out to me is that there needs to be a uniqueness to some of the creatures. Sure, orcs and goblins and ogres can me your mainstays, but it's the unique adversaries that your party will remember.

I don't have much of an issue coming up with new and unique creatures, but any resource that can assist in such is priceless.

Creature Description Generator Volume 10 - Mutations is just such a resource. I've added it to my Virtual GM's Resource Guide :)

Mutants – The word can conjure fear and sometimes revulsion. They are the same as you, yet different. Some perceive them as a threat, as a hidden danger walking amongst all good and right-minded folk, whilst some see them as the next stage in evolution for many species.

They are pitied, they are feared, they treated as outcasts. Yet a few rises above the hatred, ignoring the braying mob and doing the right thing no matter what.

They can become heroes, villains or horrible creatures with abilities not seen anywhere else. They are here to stay and you could be sitting right next to one right now.

CDG – 10 Mutations is, unlike others in the Creature Description Generator series designed to take an already existing being and give them a twist or two, turning that mundane creature into something special.

Whilst this publication is designed to be useful in as many genres as possible, some of the mutations may require a bit of tweaking to fit in with your chosen genre, such as psionics replacing magic in a sci-fi or near modern setting and so on.

As an aside, the cover is atrocious. Don't judge this book by its cover...