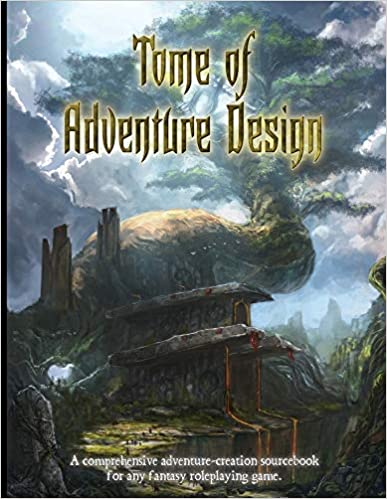 There's no secret that I'm a huge fan of Matt Finch's Tome of Adventure Design. I have it in the multi-volume set hat Matt self-published in addition to two printings in hardcover from Frog God Games. I've used it to design adventures multiple times as well as posted the process here at The Tavern.

Now you can grab the out of print Tome of Adventure Design via from Amazon, in either softcover or hardcover. The Softcover is 34.99 and the Hardcover is 49.99.

Issuing ToAD and other out of print Frog God releases on Amazon is huge, especially for fans across the pond or across the world, as it avoids the outrageous American postal rates.

The Tome of Adventure Design is organized as a series of "books," each one providing resources at every step of the way. The vast majority of the content of each book is made up of random generation tables that we created over a quarter of a century (sigh) for our own use. It shoud be said up front that these are tables for deep design - in other words, most of them are too long, and contain too many unusual or contradictory entries, for use on the spot at the gaming table. There are already many excellent books of tables for use on the fly; the tables in these books are different. They work best as a tool for preparation beforehand, providing relatively vast creative resources for browsing and gathering, rather than quick-use tables designed to provide broad, fast brushstrokes. Our shorter tables tend to deliver cryptic results designed to shock the reader's creativity into filling in the gaps, whereas the longer tables are unusably vast for easy random generation, being designed to shock the reader's creativity into operation by presenting a sea of possibilities.