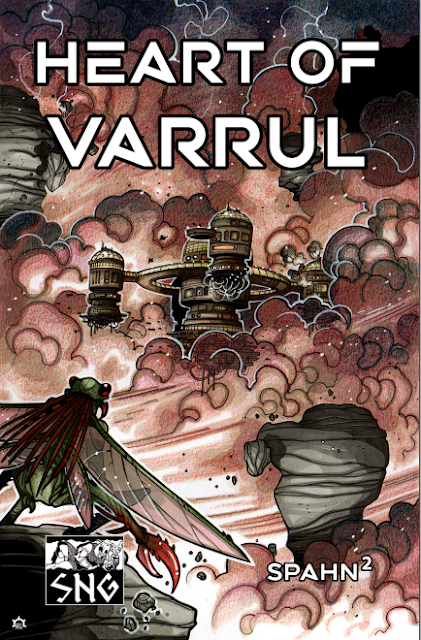 I love me some White Star. As I dig through the gaming content I've created here at The Tavern, I've found that I've created a sizeable amount of material for White Star. There are probably the seeds of a campaign floating around here if you dig deep enough. But why should you do that when you can get a White Star campaign from none other than White Star's own James Spahn and his not quite a brother nor related Pete Spahn. If the Spahns aren't a winning combination then there simply isn't one.

Heart of Varrul is the new White Star setting available from Spahn & Spahn. Pete has given me peeks over the years and I must say, it is an impressive offering.

But wait! There is a Heart of Varrul bundle for 20 bucks in PDF. It includes White Star Galaxy Edition, Rul System Adventure Pack, Walking the Way, and of course Heart of Varrul. A $43 value. If you are new to White Star this is an amazing value.

Of course, you can snag the Original White Star rules at PWYW pricing, so there is no reason not to give them a peek and see what everyone is talking about.

Note: James is like a brother to me, and I've been friends with Pete for years. They do write some good shit. Support them :)

Heart of Varrul is a White Star: Galaxy Edition™ campaign setting book that details the aliens, factions, and conflicts of the Rul System, Tathkee Station, and the Planet Varrul. The Rul System is on the brink of an interstellar gold rush and the PCs are poised to get involved on the ground floor. How they get involved is up to them!

Written by Peter C. Spahn and James M. Spahn, Heart of Varrul expands on the foundation laid by the critically acclaimed White Star: Galaxy Edition™. With illustrations by artists Nicolas Giacondino and James Shields and maps by Just Insert Imagination's Morne Schaap, Heart of Varrul is specifically designed to give Referees a readymade location to run hours of adventures.

"They call it varrulium. A lightweight ore that, when refined, shows a remarkable ability to deflect energy. It can be used to protect everything from circuit boards to dreadnaught hulls. Some say that certain alloys can even resist the cutting properties of the mystical Star Swords.

The ore is found only on the remote gas giant Varrul, which lies deep in the Galactic Beyond, but that’s not stopping anyone. There are too many free credits to be made. Millions. Maybe billions, all just there for the taking.

The big corporations are sending contractors to locate and strip mine the islands floating through the gas giant’s skies. They are hiring mercenaries to protect their workers from the local fauna. A lot of independent miners have also traveled to Varrul hoping to strike it rich.

There’s a catch of course. Varrul’s turbulent red skies are filled with clouds of toxic gases, ion pockets, and storms of superheated plasma that can burn through even the thickest bulkheads, so every trip into the planet’s atmosphere could be your last.

Then there’s the wildlife. Flocks of power suckers descend on anything with an energy signature. Giant flying worms prowl the airways, attacking and consuming survey and mining vessels. And deadly swarms of insectile beasts have already slaughtered more miners than the Rampallan Plague.

I can see you're not deterred. Safe travels on your trip. When you get there, Tathkee Station is the place to start. It’s an old SkyMall 5000 series that has been converted to a rough and tumble suborbital spaceport. It’s owner, Ingan Tathkee, is an old friend of mine. Mention my name and he’ll set you on the right path to making your own fortune, but watch your back. There are plenty of lawless types at the station ready to prey on newcomers.

You’d best hurry, though. It’s only a matter of time before the Interstellar Upheaval reaches Varrul---if it hasn’t already. Varrulium ore would be worth a fortune to the war chests of the Galactic Consortium or the Restoration. And some say there’s even more to the planet than meets the eye. Talk among mystics and scholars suggests that Varrul’s swirling gases hide a cosmic secret deep in the planet’s core, in the very heart of Varrul.

Of course, these could all just be rumors. There's only one way to find out for sure. . . "

Heart of Varrul is packed full of usable content. The newly discovered Rul System lies far out in the Galactic Beyond which makes it easy to drop into any existing White Star™ campaign. Descriptions of NPCs, factions, and locations are similarly painted in broad strokes to make them easily adaptable. All NPC entries are fully statted for the White Star™ system.

The book contains a detailed overview of the Rul System, Tathkee Station, and Planet Varrul including:

Those are affiliate links above. Affiliate links help to fund all things Tavern. Buy your bartender a beer. You know you want to ;)