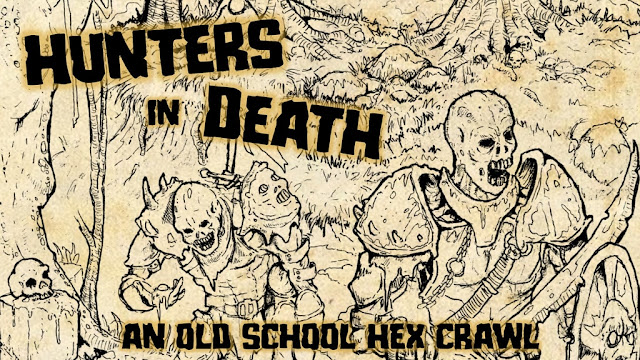 What can I say about Tim Shorts? His was one of the first blogs I ever read and Gothridge Manor was certainly one of my inspirations. I've GMed for Tim and he's GMed for me. As good as he is as a player, as a GM he is awesome and as a content creator, he is amazing. I've been a backer of his Patreon for many years and the content offered is simply top-notch.

Now the fucker is Kickstarting a zine, Hunters in Death. Do yourself a favor and back this one. It won't just sit on your gaming shelf looking pretty, I can guarantee you it will get serious use.

Did I mention it funded in just over two hours? Damn!


Let's talk about what's inside: This is a glimpse into how I run a campaign. I've run games for over 41 years, and like every game master in existence, I've created my own rules and mechanics. I provide a list of these rules/mechanics to provide a sense of immersion particular to the Komor Forest. Then you'll find Hounds Head, a place for the party to get information, get henchmen, get supplies, sell stuff, and rest until their next adventure. Then what follows is an array of adventures. The adventures aren't meant to be played in any order. While the adventures are separate there are connections between some of them. Within the adventures there are new magic items, new spells, new monsters, and new artifacts. And any old school gaming zine wouldn't be complete without random tables. Yeah, it's got some of those.

Wait a second! Our party is currently IN Komar Forest. Am I even allowed to back this? Fuck it. I ain't telling Tim if you don't ;)