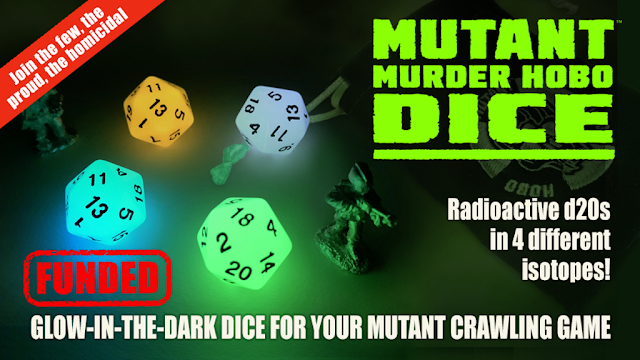 Dice. They really are my kryptonite. Glow in the dark dice in different colors? Damn it Jim (Wampler)! I'm a gamer, not a dice collector! Ah, who the fuck am I kidding? I'm both, and four glow in the dark D20s for 10 bucks or add a dice bag to the mix for 15? Yeah, it looks like more dice for my dice collection...

Damn you and your Mutant Murder Hobo Dice!


Face it. You don’t care what the adventure is called. You’re just there to blow the reactor. And nothing says that you mean business when you kick in a bunker door like rolling a glow-in-the-dark high-impact d20 across the table — unless it’s rolling a different color glow-in-the-dark d20 on your next action! These 20mm glow-in-the-dark d20s come in four different isotopes, so there’s a die for every mutant murder hobo occasion. Charge one of these chemiluminescent babies up with an LED flashlight, and they even glow in different colors with the lights on!

Proven by the super-science of the Ancient Makers to roll better and luckier than normal 20-sided dice, each Mutant Murder Hobo d20 glows when charged, and all those extra photons create a mild propulsive force that only adds to the spin, span, and sass of each toss of these deadly d20 dice.

Email ThisBlogThis!Share to TwitterShare to FacebookShare to Pinterest
Labels: dice