Wayward Kickstarter - Myth & Magic Player's Guide - Would You Consider This the Offer of a Bribe? 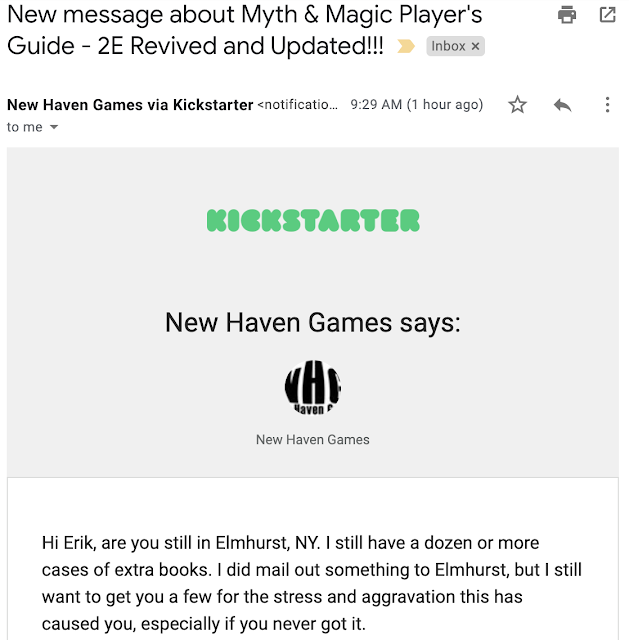 Quick background to catch folks up. Myth & Magic was a very well-received clone of AD&D 2e, at least based on the initial reception the M&M Starter Guide received.

A Player's Guide and a GM's Guide were Kickstartered. Then the problems started. Backers had photos of boxes of M&M Player's Guides filling Tom's living room, and statements that they were shipped, but that wasn't the case.

I've posted about Myth & Magic numerous times. It hasn't posted an update since March of 2016 (and you thought Gareth was bad) At one point, Tom WAS actually shipping books. He was kind enough to share my full legal name and shipping info as a comment on the Myth & Magic Kickstarter (note my sarcasm) and I was forced to contact Kickstarter to have it removed. So yes, Tom has a special place in the Tenkar's Tavern Hall of Shame.

Now, folks are still commenting about the lack of actual receiving what they paid for in the comments section on the M&M Kickstarter: 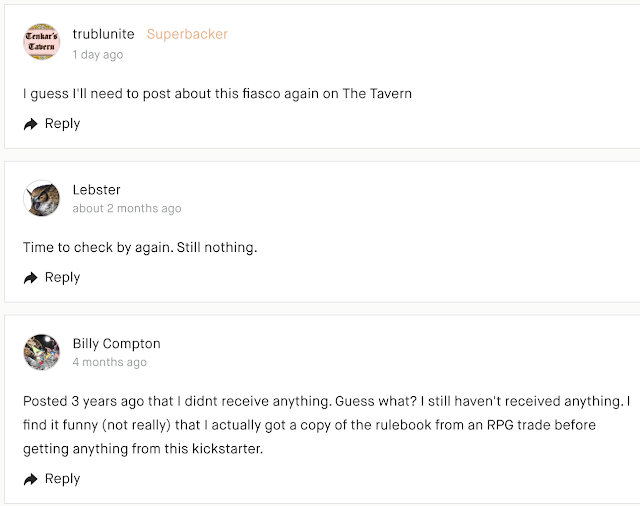 Imagine that. A day AFTER I comment that I need to post an update on the Myth & Magic Player's Guide, Tom does what pretty much EVERY lawyer does (I did mention that Tom is an Attorney, right?) to make a problem go away - he offers something of perceived value.

First, he pretends not to recall sending my initial copy. Sent to appease me and silence me, as many others years later still haven't received theirs.

Tom, you want me to go away? You want closure? Make your backers whole. Yes, the suckers that believed in you and trusted in you, much like your clients. I certainly hope you don't treat your clients at your day job as shitty as you have treated your backers.

"I may have been unfair with Gareth, as Tom is possibly the most distasteful project creator I've dealt with on Kickstarter. He must be a hoot to have as a lawyer: "No worries Mr. Smith, I've told the IRS we'll be ready for your Audit on Tuesday. Now excuse me, I'll be out of the state for the next 13 months. Don't worry, I'll email."