News - Starfinder To Land On Amazon Alexa - Is This the Future? 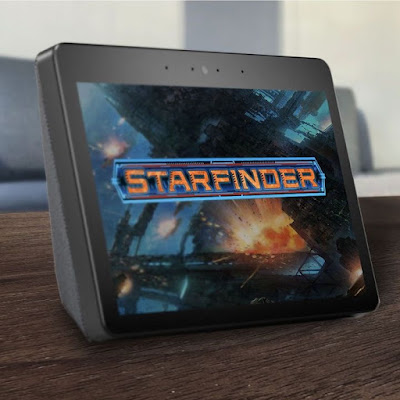 Paizo announced earlier today that Starfinder will be available on Amazon Alexa in a voice-based version of the game as of December 16th, 2019. Here's the press release from Paizo:

For months now, we at Paizo have been holding onto an incredible secret: Starfinder, the science-fantasy game that mixes dragons with robotics and magic missiles with high-tech hacking, is coming to Amazon Alexa!

Let me repeat that. This is not a drill.

On December 16, a voice-based version of the Starfinder Roleplaying Game will be available for free on Alexa devices through Amazon’s cloud-based voice service. We’re giving you a heads-up on this release so that you can track down any of the Alexa-supported devices and, if you want, play the moment the free episode drops!

At launch, just say "Alexa, play Starfinder!" on any Alexa-enabled device. You’ll beam straight into an adapted version of “Scoundrels in the Spike,” the adventure I wrote for the Starfinder Beginner Box.

The adaptation script was written by none other than James L. Sutter, former Starfinder Creative Director and an amazing author whose work really makes this voice experience shine. Incredible voice actors, sound effects, and music further make this game sing.

Specifically, when Starfinder Creative Director Robert G. McCreary and I heard the rich soundscapes of Absalom Station and felt the tension of combat with space goblins, we were gleefully astonished. This project has brought Starfinder’s world to life just as we imagined, and for me it was a truly awe-inspiring experience.

The rules Alexa uses to run the adventure are similarly adapted from the Beginner Box. Starfinder fans will recognize the player character options as Iseph the iconic operative, Quig the iconic mechanic, and Navasi the iconic envoy. What’s more, Raia the iconic technomancer can serve as a best friend and sidekick in these adventures. Simply put, there’s a lot to recognize and love if you’re already a fan of Starfinder. If you’re new to the game or even to tabletop RPGs in general, this experience is a fantastic gateway to a lifetime of adventure and fun

Beyond the pilot episode, Paizo and Amazon have big plans to bring more paid episodes of the Starfinder voice game to Alexa. But we’ll save that reveal for another blog—and probably a press release or two.

Before I smoke-bomb away from this exciting announcement, I’d like to just gush for a moment about how much of a dream this project was, both as a creative and as a manager. As we’ve spun up this initiative, I’ve gotten to work with some fantastic folks at Amazon, whose excitement for this project has left me energized and astounded at the power of tabletop storytelling across all media.

I’ve also gotten to work extensively with Rob and Sutter on this project. It’s been like a wonderful reunion of sorts, bringing me back to the days of working with those guys on the Starfinder Core Rulebook—and it’s made me realize how much I miss working with Sutter, especially since we both have a tendency to shriek and cackle when we get excited in creative meetings. I miss making that beautiful music with you, James.

Nostalgia aside, the entire Starfinder Alexa project has involved great team members, and the Starfinder team as well as folks all across Paizo have done a great job giving us feedback on the in-development game and generally supporting us along the way.
Now, time for that smoke bomb! Check out “Scoundrels in the Spike” when it drops, and stay tuned for more Paizo-Amazon news soon to come!