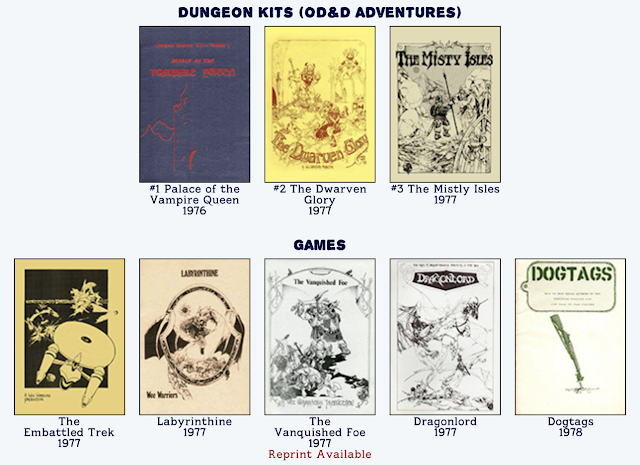 You can read the press release directly here. - Tenkar

Precis Intermedia is pleased to announce that it has acquired the intellectual property rights to Wee Warriors and its products. Founded in 1975, Wee Warriors produced not only what is believed to be the first character sheet for Dungeons & Dragons, but also the first stand-alone adventure. Wee Warriors later went on to produce two more adventures, game accessories, and a number of small tabletop games, including The Embattled Trek and Labyrinthine.

Classic reprints of most of the product line are expected in both PDF and print formats, as are further development and new editions in the future. More information on Wee Warriors products can be found at the Precis Intermedia web site (http://www.pigames.net).

A classic reprint of The Vanquished Foe, a mini-boardgame, is now available in PDF and printed formats. With a low price tag, you no longer need to spend a fortune to find a rare original of this early dungeon-style game.

"As a vintage game collector, I am delighted to be able to bring back these largely-forgotten gems," says Brett M. Bernstein of Precis Intermedia. "These games and modules were created in a time devoid of today’s plethora of advanced software and print services. It is a testament to the creative spirit."

Incorporating one of the first electronic publishers of roleplaying games, Precis Intermedia is known for its diverse line-up, clear and concise games, and the return of vintage titles. Current lines include Shatterzone, Bloodshadows, Supergame, Two-Fisted Tales, Lords of Olympus, Man, Myth & Magic, Mean Streets, Warcosm, the Amazing 8in1 Die, Disposable Heroes Paper Minis, and much more.