See the number of "bans" on the Tenkar's Tavern Discord server? Nearly 1k are bans of spambots. Just a handful are "for cause". See that Dyson was banned? Why was Dyson Logos banned? For private messaging EVERY Designer & Maker that was on the Tenkar's Tavern Discord Server at that time. There were 41 or 42. Dyson was upset that Alex Macris was a Designer & Maker and had his own channel on the server.

I was hammered with complaints from those he messaged. They felt they were being harassed, and I agreed. (BTW, PMs are more personal than emails - these weren't emails) So, in response, I banned Dyson Logos from the Discord Server. It should be noted that Dyson had previously blocked me on Facebook after leaving me a really nasty PM (nearly a year prior). He sent his message and then he blocked me, so I couldn't respond. I'm not sure if that's how he handles every disagreement, but what I can tell is that he believes in some revisionist history. Heck, I'm still surprised that he participated in a few weekly chats after flaming out on me on Facebook.

See, here's the latest from Dyson Drama himself (BTW, the harassing and banning are over a year ago now). No idea why this is coming up now, a year later, but I'm guessing he is looking to rile up his circle to light some torches in August. 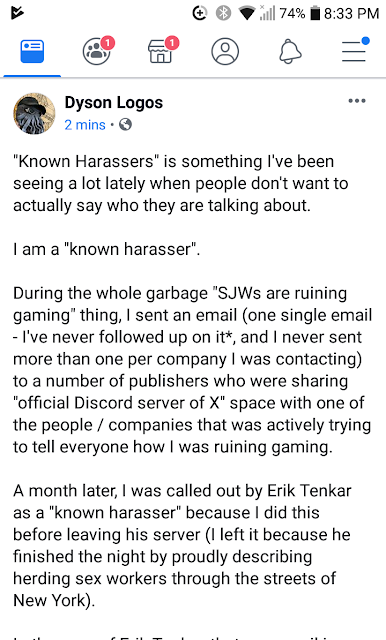 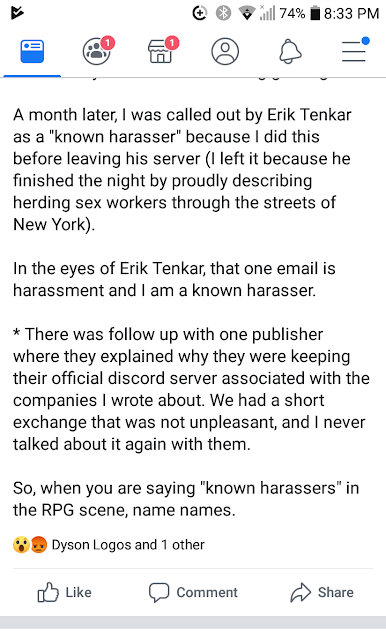 Let me address a few things I haven't addressed above. As far as I know, I've never referred to Dyson as a "known harasser". I name him when I talk about him and I certainly have referred to him as a harasser. I also haven't talked about Dyson in a long time so this is a bit out of left field. But hey, I've mentioned you now. I know it is what you want, to try and stay relevant you need to be talked about.

Yes, I've mentioned the "cattle drive" of 100 plus prostitutes in the late 90s in Hunts Point on the weekly chat in the past, but that is not why Dyson left the Discord Server. He was banned, by me, for the harassing of server members. He did not leave of his own choice month later, he'd already been banned.

Truth is damning at times.

Email ThisBlogThis!Share to TwitterShare to FacebookShare to Pinterest
Labels: drama