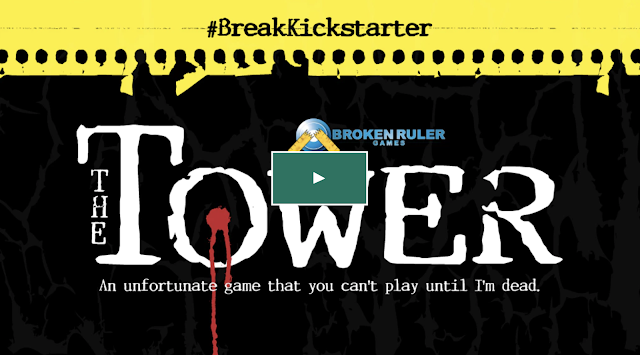 "A tabletop roleplaying game for #BreakKickstarter where you don't get to play the game until the creator is dead."

So apparently "Break Kickstarter" is a thing. I don't think this is what was expected, but it certainly breaks Kickstarter expectations.

A password-protected PDF, where the password won't be released until the creator dies. Damn, surprised Gareth didn't think of this scam.


Content Warning: While I cannot tell you what the game is about, it is my responsibility to let you know The Tower deals with mature subject matter involving deadly violence and its consequences both physical and emotional. Anyone who might not find this to their liking might not want to back this campaign.

Some ideas are a hard sell. They may have an important message you want to share with the world but there's something about the idea that's controversial or risky. Particularly when it comes to making a game about a terrible event that will spiral out of control in ways we never imagined until it becomes a part of modern life. You know you may never be able to share it but it never truly goes away. Until you see a sign and the opportunity suddenly presents itself.

The Tower is a mature tabletop roleplaying game about a terrifying moment that changes the lives of the people involved. And you won't be able to play it until I'm dead. In the spirit of Break Kickstarter, this campaign will provide you with a password-protected PDF of the finished game by the promised delivery date. The password will only be provided by me in the event of my death by natural or accidental causes.

Yeah, I think not. It will complete but your reward will not be usable. Sure, it breaks Kickstarter but its also useless.

Leave it to a Canadian ;)