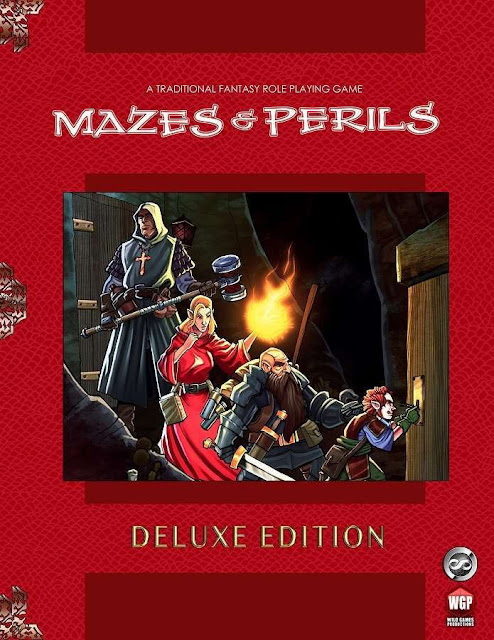 There is some interesting history behind the original Mazes & Perils, Vince & myself. Long story short, I would probably never have started podcasting if it weren't for Vince and his friendship. Yep, I call Vince a friend, but that doesn't mean that Mazes & Perils Deluxe Edition isn't one of the best OSR rulesets on the market. It quite simply is, and if you haven't checked it out yet, now is your opportunity at a very fair price.


The Mazes & Perils Role-playing Game (MnP) takes a page from the first wave of the Old School Renaissance (OSR) when it wasn’t OLD at all… Inspired by the 1977 “Holmes” edition of the world’s most popular role-playing game, it shuns pages and pages of rules for a simpler time when House rules were the order of the day.

First released in 2012, MnP drew a line on the map of OSR retroclones as something easy to pick up and play where your heroes weren’t superheroes. There are no superpowers here. Fighters have swords and armor. Clerics have their faith. Thieves skulk in the shadows seeking better items to steal. And Magic-Users sling magics at their foes until they run out of spells. This style of gaming is about grit and wit – and if you die, it must be time to roll up a new character.

The original book was awarded a Gold Ennie Award in 2013 for "Best Free RPG" and now we've updated it with even more great content!

Now in 2016, a new version of MnP – with some new classes, new spells, new optional rules, and a new look! Mazes & Perils Deluxe offers everything you liked about the original with a new coat of paint and a few new tools in the toolbox! New bits include:

Come check out a blast from the past and see why OSR is alive and well!

Originally $7.99 in PDF and recently reduced to 4 bucks, for 24 hours only Mazes & Perils Deluxe Edition is on sale for $2.40. Probably the biggest bargain in OSR gaming this week, if it isn't in your virtual rules collection, it should be.

As I said above, Vince is a friend of mine. That being said, Mazes & Perils stands on it own, it simply is damn good. Yes, that is an affiliate link above. Affiliate sales help keep the beer cold and the lights on at The Tavern. I thank you in advance.

Email ThisBlogThis!Share to TwitterShare to FacebookShare to Pinterest
Labels: deal of the day, DTRPG Sale, Holmes, mazes and perils, OSR