When I'm Asked "Why Swords & Wizardry Light?" THIS Will Be My Answer 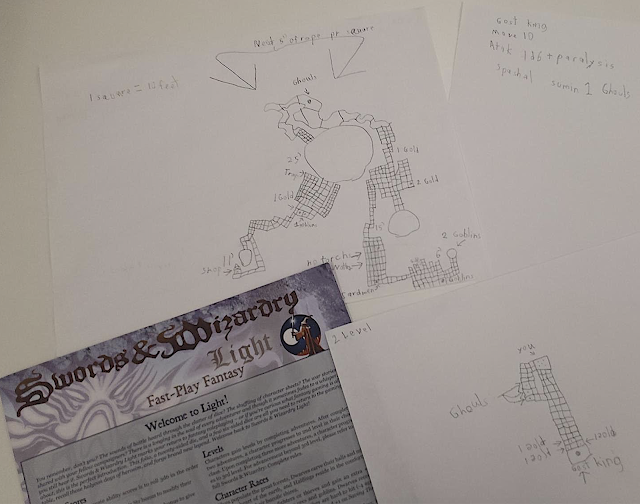 I've been asked "Why Swords & Wizardry Light?" more than once. I've been told it wasn't needed, dumbs down the game and basically has assailed the senses of a handful of Grognards.

I wrote the four pages in question to help ease lapsed gamers back into the hobby, introduce other gamers to the OSR, bring new players into tabletop roleplaying, but even more importantly as a lowered entry bar to RPGs that kids would not feel intimidated by.

My niece was just a month short of her sixth birthday when I showed her an early copy of the Swords & Wizardry Light rules. Her response? "Uncle, did you write this for me? Its only four pages. You can teach me to read four pages and then I can play D&D!"

The above picture was shared by Carl Heyl (podcaster at Save or Die, an active member of the Tenkar's Tavern Discord Server and apparently a skilled ambassador to younger gamers.)

To quote Carl: "How's this for cool Erik Tenkar? Gave a kid a copy of Swords & Wizardry Light last week at our gaming group and this week he came on with his own mapped out dungeons."

This. This is why Swords & Wizardry Light exists. Sure, it's a great ruleset to run at conventions. That's a bonus. The kids, that's where it's at. They are the future, both in our gaming and in life beyond.

I'm stoked and all smiley. Can you tell? heh
Posted by Tenkar at 8:01 PM