State of The Tavern: What Insanity Have We Wrought? 26 Designer's & Makers signed up to be Interviewed on the Tavern Chat Podcast 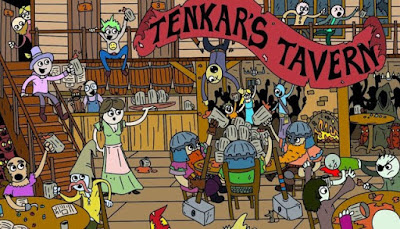 This morning Pexx and I, Pexx being the right hand at The Tavern's Discord server and many other things Tavern related, had one of our twice-monthly virtual meetings. We brainstorm ideas and come up with a schedule a few months in advance for things we'd like to see happen with The Tavern. Today Pexx pitched "why don't you do a series of interviews on the Tavern Chat podcast with the Designers & Makers - the creators in the OSR community."

Damn, that was a great idea. I told Pexx to make it so. Four hours later, he had 26 interviews lined up and loosely scheduled. I say loosely, as I wasn't involved in the scheduling and some simply won't fit my schedule, as open as it generally is. Still, 26 interviews waiting to be done, kicking off tonight. That was the response in the first 4 hours. I'm honored and terrified at the same time.

I was thinking of sharing the interviews once a week on the Tavern Chat Podcast, but we may have some weeks where we have two. And yes, the crossover episodes are still going on. Phew!

Email ThisBlogThis!Share to TwitterShare to FacebookShare to Pinterest
Labels: state of the tavern, tavern chat podcast