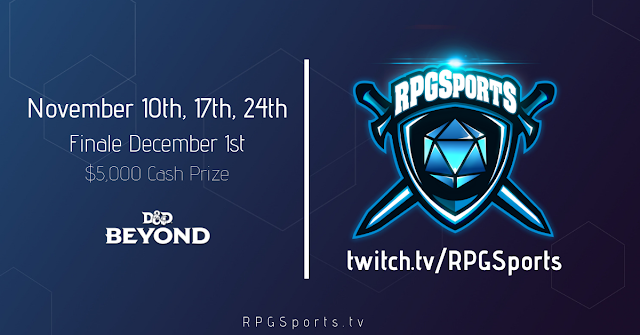 I missed this change in title (and website) as well as the drama over the invite / revoked invite / never invited Youtube personality (pick and choose what happened, it matters little)

Anyhow, DnDSports is now RPGSports. Now, why would one change their name from "KleenexSports" to "TissuePaperSports?" Here's the official announcement of the name change (with some relevant highlighted comments from myself):


We’ve heard a lot of great feedback, but one thing we weren’t expecting was SO much interest for us to expand outside of just Dungeons & Dragons! (somehow I doubt this) Therefore, we’ve decided to broaden our approach and become RPGSports!

We have a new Twitch channel here!

Of course, in other ways this doesn’t change too much. The first RPGSports tournament this November will still be played using the Dungeons & Dragons fifth edition rules. We noticed some confusion online, and so wanted to take this opportunity to clarify that this is an EncounterRoleplay production. While D&DBeyond are sponsoring this tournament, Wizards of the Coast are not affiliated with RPGSports. (emphasis mine - read these two sentences carefully)

We’re excited to start releasing more information on rules, to announce the star-studded teams, and to tell you how you can get involved in RPGSports!

Thanks for sticking with us while this exciting project continues to expand and grow.

Then there is THIS later down the page:

The EncounterRoleplay & D&DBeyond crews have teamed up to bring this production to life! While we’re playing Dungeons & Dragons, we don’t have any affiliation with Wizards of the Coast. (again, emphasis mine)

You can read the latest PR share at ENWorld.

Note: D&D Beyond is NOT a WotC or Hasbro company. They have a D&D license.