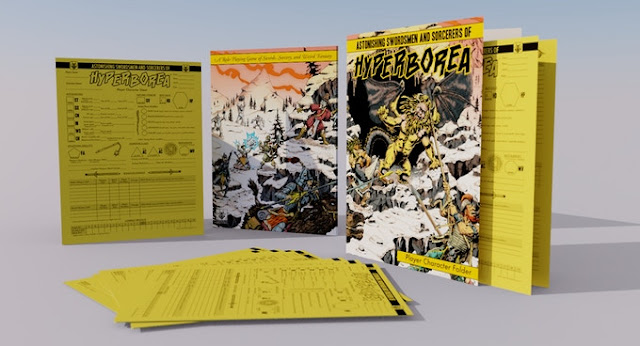 My God! The HYPERBOREA: Players' Manual, Referee's Screen, and more! Kickstarter launched yesterday and it has already surpassed $21k in funding. Why do I feel like I am late to the party ;)

So, what is Jeff offering this time around?


From North Wind Adventures, an exciting new Kickstarter campaign for Astonishing Swordsmen & Sorcerers of Hyperborea™, a role-playing game of swords, sorcery, and weird fantasy. This bundle features four new products intended to improve the fun and excitement of your AS&SH™ game day.

The Hyperborea Players’ Manual compiles Volumes I, II, and III of Astonishing Swordsmen & Sorcerers of Hyperborea, as originally presented in the AS&SH 2E hardback. The milieux of AS&SH are inspired by the fantastic literature of Robert E. Howard, H.P. Lovecraft, and Clark Ashton Smith. AS&SH rules and conventions are informed by the original 1974 fantasy wargame and miniatures campaign rules as conceived by E. Gary Gygax and Dave Arneson.

The Hyperborea Player Character Folder is a valuable supplement for players of Astonishing Swordsmen & Sorcerers of Hyperborea. This 9 × 12-inch,two-pocket folder will feature wraparound cover art by Del Teigeler, with colours by Glynn Seal. The folder will contain 10 booklet-style AS&SH character sheets, each measuring 8½ × 11 inches (i.e., a single 17 × 11-inch sheet folded in half) on classic goldenrod paper. Additional AS&SH character sheets can be downloaded and printed from our website at www.hyperborea.tv. Keep your character sheets, notes, and maps organized with this great new resource!

The Hyperborea Referee’s Screen is a useful game day accessory for referees of Astonishing Swordsmen & Sorcerers of Hyperborea. This 44 × 8½ inch, four-panel screen will feature an exterior panoramic scene of Hyperborea, with art by Diogo Nogueira and colours by Daisey Bingham. The interior will display the most relevant AS&SH tables for ready reference.

Rats in the Walls and Other Perils will feature the classic Astonishing Swordsmen & Sorcerers of Hyperborea adventure, “Rats in the Walls”, by Jeffrey P. Talanian. This adventure, originally published in 2014 as a special “swag bag” giveaway at Gary Con VI, was inspired by the eponymous story by H.P. Lovecraft. This revised and lightly expanded version will bring that title up to date with our current catalogue of adventure modules.

Rats in the Walls and Other Perils also will include two more short adventures: Chainsaw’s “The Brazen Bull”, and “The Lamia’s Heart”, by Jeffrey P. Talanian. (An early draft of the latter was published in the AFS fanzine.) Edited by David Prata, all three adventures are set in the dismal City-State of Khromarium and designed for from four to six characters of 1st or 2nd level. Like our popular adventure module The Anthropophagi of Xambaala™, we think you will find this to be a great AS&SH campaign starter. It contains just enough mystery and danger to whet the appetites of your players, introducing them to the weird world of sword-and-sorcery role-playing in the City-State of Khromarium.

There are MANY different backer levels for PDF or Print, with the above on their own or bundled.

If you just want the Player's book, the GM screen and the adventures in PDF its 25 bucks.  If you want it all in Print plus PDF (including "goldenrod character sheets and a folder) its 90 bucks. In my opinion, those are the sweet spots.

With all due respect to Jeff - Fuck You! Just take my money damn it!