Here's the latest Appendix N Kickstarter update. I backed for $100. I got my first shipment (which didnt have the bells and whistles of the 2nd shipment) which was the first 2 adventures. Did every that was supposed to get their first 2 adventures?

So, I'm gathering from this update that the current shipment will include #3, 4 and 6 and some extras that were in the 2nd shipment of the first 2 adventures.

I like John. I really do. I almost wish he had just thrown in the towel on this. Because the endless stretch goals made this one hell of a money sink. This is a solidly in the red project. Again, in print stretch goals can kill a successfully funded Kickstarter. In this case, we ave folks that still haven't gotten their first shipment five years after it was supposed to ship

As I prepared the next two modules in print to ship, I was not happy with the amount of material in them as compared to the first two modules. I know it has been too long and I need to wrap up this project, but I went ahead and expanded the two adventures a bit and made them much deadlier too. I have also added almost all of the Add-On Adventures to these two modules as well. I know some folks did receive a couple Add-On Adventures in print during the second shipment, but not everyone. Now everyone will. And lastly, I have also included the Kickstarter-Only Add-On Adventure #6 by Michael Curtis, “Room and Boarded.” Pictures of each module packet are below with the details.

Each of these two module bundles have been made by hand in the BHP workshop (other than the thee covers) and each bundle has been signed and numbered by me.

I am currently shipping to the $500, $200, $100 pledge levels, to those who offered extra for shipping, and to the few folks who did not receive either one or both of the first two shipments. I will post the progress each week on Fridays.

Appendix N Adventures #5: "A Face to Face With Dzyvatz," by Yves Larochelle is a much larger module that is nearing completion (just waiting on cover and map art). The plan is to have it ready, released, and printed by Gary Con. Again, everyone will get a pdf of the module and those who gave extra for shipping and the pledge levels above $50 will get a copy of it in print.

Thank you for your continued patience. See you on Friday. 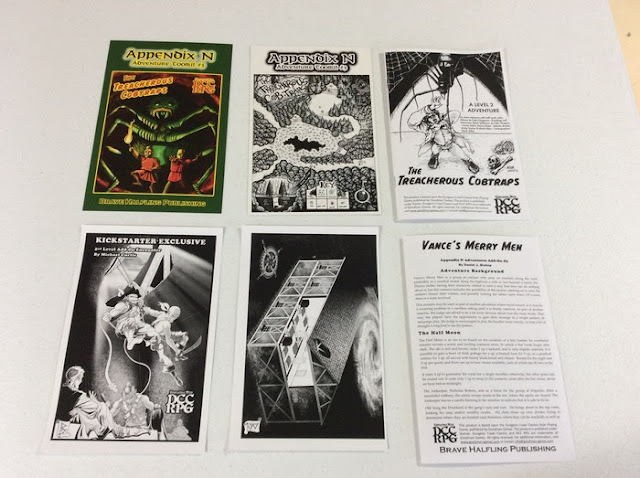 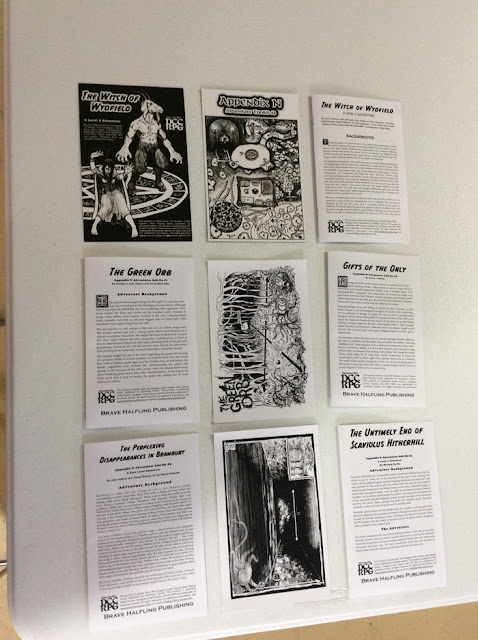 Appendix N Adventures #4: “The Witch of Wyfield” Bundle by John Adams
"The Green Orb" by Sal Mac and John Adams (with Cardstock Map)
"Gifts of the Only" by Daniel J. Bishop
"The Perplexing Disappearances in Brambury" (with Card stock Map) by John Adams
"The Untimely End of Scaviolus Hitherhill" by Michael Curtis
Posted by Tenkar at 10:44 PM