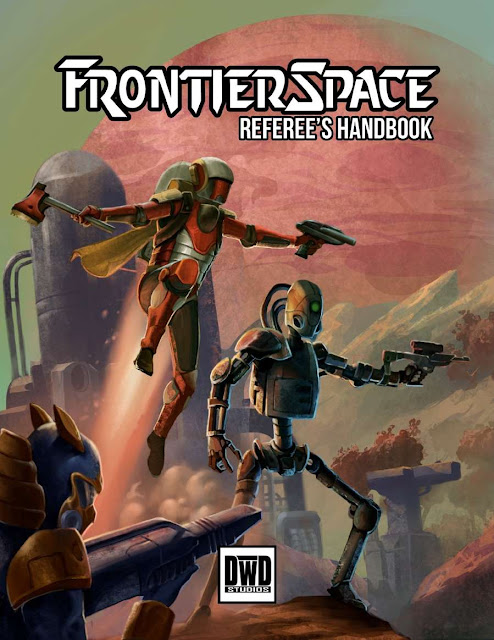 The FrontierSpace Referee's Handbook just released (its the companion book to the FrontierSpace Player's Handbook). If FrontierSpace brings you the warm fuzzy feelings of classic Star Frontiers, its meant to. Its not so much a clone as a homage, presented with the care of folks that truly do love and respect the source material.

So, what do you get in the FrontierSapce Referee's Handbook that you don't get in the Player's Handbook? Well, if the player's book gives you the nuts and bolts of the system, the ref's book shows you how to put it all together for campaign play.

A Referee is many things: host, writer, actor, and judge. While players play, you have to do everything else. It’s almost like work, and isn’t for everyone. But you’re different; you LIKE the job. It’s a big job to do, and your toolkit should stack up to the size of your job.

The Referee’s Handbook is the essential toolkit for the FrontierSpace roleplaying game. While it does contain rules for action, adventure, and combat – it is full of so much more. A wealth of game preparation tools accompany this rulebook.

Inspiration is contained herein. Add psionics to your games. Design security systems and corporate installations to infiltrate. Customize characters, weapons, robots, vehicles, and starships. Design your own species and creatures. Build a campaign setting of your own, or flesh out the one provided. Generate star systems and planets to explore. You just add imagination!

The Referee's Handbook is the essential toolkit for every FrontierSpace Referee. Contained in this book you'll find all the rules you need for running the game. This is a companion volume to the Player's Handbook, available here.

I've been impressed with the FSPH. I'll need to catch up on the FSRH after I return from GameHole next week.