RPGNow is running a September Setting Sale with thousands of titles in the mix. That's a lot to sort through. I'm going to try to pick out some of my personal favorites that are OSR or system neutral over a small series of posts (although one or two may creep in from outside those parameters) Part 1 is here.  Part II is here. Part III is here. 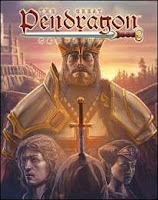 The Great Pendragon Campaign - I've owned every edition since the original boxed set :) "For 1500 years King Arthur’s story has been told around campfires, in noble courts, in taverns, books, movies and now, with the prize-winning King Arthur Pendragon roleplaying game, at your game table. The Great Pendragon Campaign begins during the reign of Arthur’s father King Uther, when player knights can participate in the events of Arthur’s conception. The long and brutal Interregnum of Saxon wars is forever altered when Arthur draws the Sword from the Stone to start his great and glorious reign. The Boy King leads his knights through periods of consolidation and expansion until the entire Western world is brought under his sway. Then, to High Adventure! Knights gain Glory and lands in the periods of Romance and Tournaments, and at last engage in the greatest adventure of all, The Quest for the Holy Grail. Then, amidst tragedy and broken dreams, the Twilight Period draws the epic to a close. Eighty years of campaign detailed year-by-year provide the background, on-going events and adventures that define structure of King Arthur’s glorious reign.The Magic is in The Details, and The Details are in This Book."  24.99  16.74 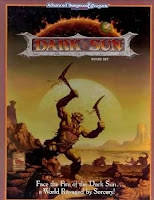 Dark Sun Boxed Set (2e) - this is the classic dark setting from the 2e era of AD&D - aside from Greyhawk and the Forgotten Realms it is the setting I ran the most - "Amid the barren wastelands of Athas lie the scattered city-states, each in the grip of its own, tyrannical sorcerer-king. Protecting their own positions with dark magic, they demand absolute obedience. The restless mobs are placated with bread and circuses --the arenas overflow with spectators seeking release from their harsh lives. The land outside the cities belong to no one. Savage elves race across the deserts while insectoid Thri-Kreen satisfy their taste for blood. Dwarves labor at projects beyond the scope of men, and feral halflings lie in ambush.  Athas is a land of deadly magic and powerful psionics that offers promise of glory or even of survival. Those who do not have the cunning to face life on Athas will surely perish - leaving nothing but bones bleached white under the blistering rays of the DARK SUN."  9.99  6.69 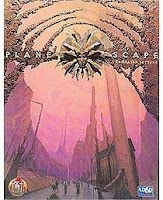 Planescape Campaign Setting (2e) - probably the setting I wish I had run more in the 2e days - so many awesome settings - "Discover the multiverse! Enter infinite universes of infinite variety, worlds beyond the prime-material settings of the AD&D game. Explore Sigil, the City of Doors, filled with portals to every layer of every plane. All you need is the right key, including. . . A Player's Guide to the Planes: A 32-page primer that introduces DMs and players alike to the grand design of the multiverse. A DM's Guide to the Planes: A 64-page book of valuable information solely for the Dungeon Master. Sigil and Beyond: A 96-page gazetteer that introduces Sigil and its surrounding plane as the starting point for planar adventures. From Sigil all the Outer Planes may be sampled by novice and veteran explorers alike. Monstrous Supplement: a 32-page, full-color Monstrous Compendium booklet. Four poster-size maps depicting the planes. A four-panel DM screen designed especially for planar campaigns. Until now, only the most powerful wizards could peek into the magnificent multiverse, but no longer! Gone are the unimaginable distances and the insurmountable obstacles that only the ultrapowerful could hope to overcome. Now even the greenest adventurer can enter the planes, though surviving long is another matter . . . Have at it, berk! Powers, proxies, planars, petitioners, and wondrous monsters await just beyond the portal. Step through and partake of the infinite excitement of Planescape."  9.99  6.69

World of Greyhawk Fantasy Game Setting (1e) - the setting I quite simply ran all my campaigns in during the 1e era starting with the folio and then with this boxed set as well as much of the 2e era - I can't say enough about it - "Enter the WORLD OF GREYHAWK ...A world where bandit kings raid from their remote stronghold; ...A world where noble elves fight savage invaders and where bold knights wage war on the terror of Iuz; ...A world scarred by a vast Sea of Dust, across which drift lost memories from the awful forgotten past. Enter a World of Wonder & Intrigue... Fantasy Game Setting for a panoramic view of this fantastic place. More than a collection of maps and names, it is an active world filled with decaying empires and dark forests. Game elements include the gods of Greyhawk, the clash of political factions, and encounters in this wild land." 9.99  6.69

Ravenloft Campaign Setting, Revised, Boxed Set (2e) - I never ran a Ravenloft campaign but I ran a bunch of ons-shots where my regular party would find themselves in a demi-plane - "This new edition of the RAVENLOFT game combines the original Realm of Terror boxed set with elements of Forbidden Lore and updated rules from other accessories. Domains destroyed in the infamous Grand Conjunction have been deleted, new domains added, and key personalities detailed.  This boxed set includes: Realm of Terror - a 160-page book of rules concerning the reshaping of character classes; fear, horror, madness, and powers checks; curses; spells and magical items,both new and old; psionics; techniques of terror; and more. Domains and Denizens - a 128-page book describing the dark lands of the Core, the islands of terror, and many nefarious personages. Two maps depicting the reshaped Core domains and the islands of terror. A poster featuring a painting by artist Robh Ruppel. A tarokka deck of beautifully illustrated cards for role-playing fortunetelling. A DM screen specifically designed to be used with a RAVENLOFT campaign." 9.99  6.69

Purchases made via The Tavern's affiliate links help to support The Tavern. Additionally, if we generate $300 or more via OBS affiliate referral monies, I've promised to release a short adventure in the month of October for free on The Tavern. Just under 47 bucks to go. If we surpass $300, I'll look to invest the extra monies into original art or cartography for the adventure.
Posted by Tenkar at 6:34 PM