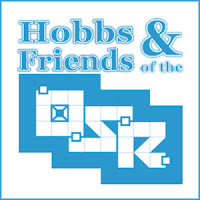 As I've said many a time in the past year or so, my podcast listening has suffered with my lack of daily commuting. I'm not saying I wish I were commuting again, but I do need to set aside more time to listen to podcasts.

One of the better podcasts out there, especially if you dig the OSR is Hobbs & Friends of the OSR. Relatively knew to the podcast scene, +Jason Hobbs has hit the ground running. I've really enjoyed the conversations he's had with various guests (most of them return on a semi rotational basis)

Now, Hobbs & Friends #12 is not the latest episode (that would be episode #15 - Gaming with Kids) I was listening to the last when Jason mentioned a rant about the Three Castles Award (NTRPG), so I backtracked to episode #12. Its at the end of the episode (31 minute mark or so) and everything Jason said was spot on about this year's award ceremony (such as it was). The chariot racing trophies got more play and care than what is supposed to be THE industry award for the OSR. It made many of us cringe. It was the low water mark of a convention that set many high water marks this year - awesome new venue, new attendance high, an amazing selection of special guests.

There's much I could say, but Jason says it better than I ever could. Heck, one of his guests in episode #12 had a Three Castles Award nomination this year - not that you would have known. Sigh.

In any case, Jason has an eye on the OSR, warts and all as well as amazing discussions of game theory and gaming ideas. Give Hobbs & Friends of the OSR a solid listening to, you won't be sorry.

Email ThisBlogThis!Share to TwitterShare to FacebookShare to Pinterest
Labels: hobbs and friends, podcasts