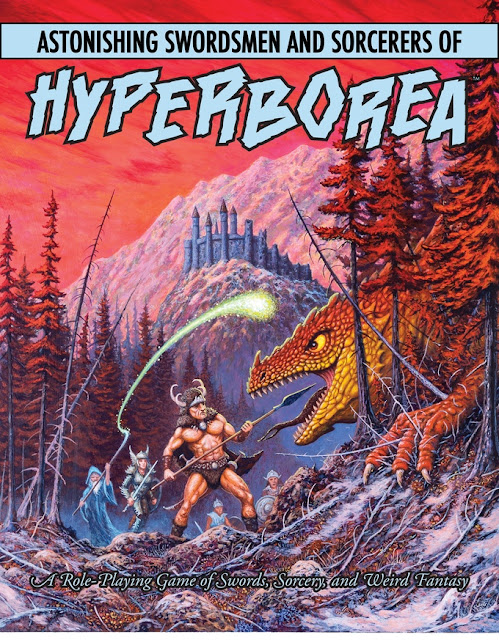 Astonishing Swordsmen & Sorcerers of Hyperborea is back in a new 2nd Edition, and it looks to be glorious. +Jeff Talanian has gone all out with the art this round and I must say, I am extremely impressed. Jeff has a good eye for art but damn...

The Astonishing Swordsmen & Sorcerers of Hyperborea 2E Kickstarter has a goal of $15k. It went live less than 12 hours ago. It just passed $25k. Yep, that's the reputation that Jeff has. 4 stretch goals down and none of them should effect fulfillment.

Astonishing Swordsmen & Sorcerers of Hyperborea is the creation of Jeffrey P. Talanian (Castle Zagyg, Charnel Crypt of the Sightless Serpent, Mystery at Port Greely). It is a role-playing game inspired by the fiction of Robert E. Howard, H.P. Lovecraft, and Clark Ashton Smith, with rules descended from the original 1974 fantasy wargame and miniatures campaign rules as conceived by E. Gary Gygax and Dave Arneson.

The heroes of an AS&SH game delve dungeons filled with horrifying monsters, lethal traps, and bewildering puzzles; they explore savage wilderness frontiers and hostile borderlands; they probe ancient ruins and investigate cursed tombs; they match steel against sorcery and sorcery against steel; and they plunder for gold, gems, and magical treasure.