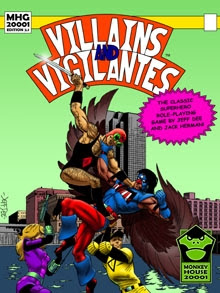 Looks like +Jeff Dee has the rights to publish Villains &Vigilantes and Scott Bizar does not.


Update on the Legal Battle

We stated in a previous post that we expected it to take at least 3 months for the courts to issue a ruling on the appeals surrounding our victory in the lawsuit over the publication rights to V&V.

Well, it didn't take 3 months. We have the court's ruling in hand. The appeals court is sending the case back down to Arizona to re-visit several issues. But on one particular issue - the one that's most central to our case - the judges were absolutely clear. Quoting from their ruling:

"Reviewing de novo, Lopez v. Smith, 203 F.3d 1122, 1131 (9th Cir. 2000) (en banc), we hold that summary judgment in favor of Dee and Herman was proper on the copyright claims. The 1979 contract granted to FGU, Inc., publication rights to the 1979 Villains and Vigilantes Rulebook. The parties’ course of conduct extended the contract to apply to the 1982 Rulebook, as well. But the contract expressly provided that the agreement would terminate by operation of law if FGU, Inc., ceased to do business for any reason. The agreement also prohibited the assignment of any rights under the contract without the written consent of the other parties. By the terms of the agreement, when FGU, Inc., was dissolved in 1991, all rights to the 1979 and 1982 Rulebooks reverted to Dee and Herman. Accordingly, all sales after the 1991 dissolution of FGU, Inc., of the 1979 or 1982 Rulebooks were infringing acts."

In plain English: we have the legal right to publish our superhero role-playing game, and Scott Bizar does not.

As we said, the judges sent several other issues - most notably, the question of the trademark - back down to the Arizona courts. We remain confident that all of our rights will ultimately be upheld.

Thanks for your continued support!

Email ThisBlogThis!Share to TwitterShare to FacebookShare to Pinterest
Labels: villains and vigilantes