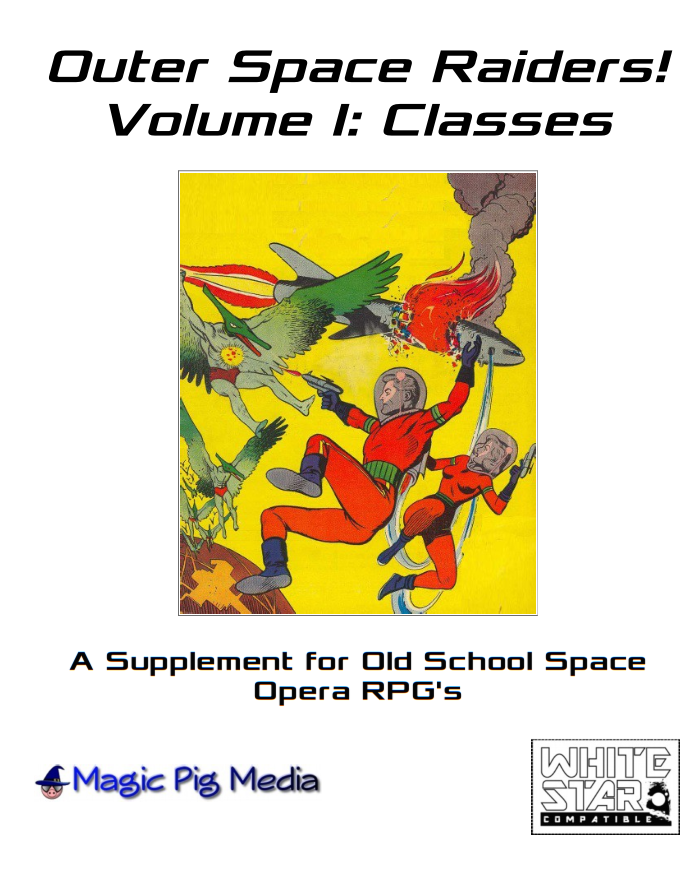 White Star hasn't even been out two week and the 3rd party releases are already hitting OneBookShelf. It looks like +James Spahn will get his wish - White Star will be well supported.

First, a surprise. The Table of Contents has hyperlinks. Nicely done Chuck.

Now, on to the content linked to via the Table of Contents ;)

The Alien class is the first one we come across. Not content with just 2 options in the core book, your Alien characters can now pick 2 special abilities from a list. Yep, they can now be fairly unique.

Astromancers fit into "the world was once much more advanced than it is" type of setting. The get "Formulas" which is kinda like spells. They won't fit every setting, but for Swords & Super Science they may a good fit. There are a few pages devoted to their Formulas.

Engineers are the gadget freaks: "Highly skilled Engineers can build a laser pistol out of a rock, a magnifying glass, and some duct tape." This is my kinda class. They have a well detailed list of their abilities per level.

Lost Worlders are the barbarians of the future. If you want to kill things and break things and aren't concerned about using advanced technology, this is the class for you.

Scoundrels fit into just about any sci-fi campaign. Han Solo and Mal are just two examples I can think of off hand. They get lucky breaks and a random bonus determined at the start of each game session. Pretty neat.

Warp Ninja - a monk like character that harnesses the power of a dark star. Not going to fit in the average sci-fi setting, but might make for a good NPC bad guy.

Random Humanoid Species Appearance Charts - want to make sure that all of your humanoid races don't look like straight up humans? These charts are for you. I'm a big advocate of less is more, so I'd probably only roll on one or two charts per species but they do make for great inspiration.

Pretty good value for a buck fifty and an excellent first product for Magic Pig Media.
Posted by Tenkar at 8:09 PM