Patreon Highlights - Dyson Logos and his Maps for OSR Games 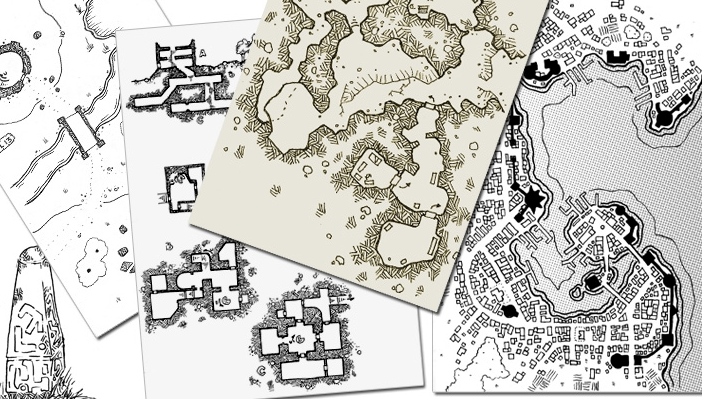 When you think OSR mapping these days, two names quickly come to mind - +Dyson Logos and +matt jackson . Sure, there are others, but these two stand on top of the pile. Dyson seems to have taken it up to eleven.

+Dyson Logos seems to have been mapping forever (just look at his blog), whether it was doodling out a map or putting together many levels of dungeon mapping stocked with creatures and death for the unwary. Dyson is also the first of the OSR creators to make Patreon an integral part of the process.

Let me break down the success Dyson has had with his maps on Patreon in simple numbers:

Yes, you read that correctly. 256 members of our hobby are putting money in Dyson's virtual tip jar whenever he publishes a new map to his blog (actually, not 100% accurate, as folks can limit their monthly contribution and later maps in a given month will generally fund less that earlier maps in the same month, but you get the idea - there are a ton of folks backing him to produce content for our corner of the universe.)

Dyson says he produces 8-10 maps per month. So, ideally he could potentially make $3,518 or so per month, but remember what I mentioned above - later maps fund at a lower overall donation than earlier maps. Still, Dyson isn't just a skilled mapper, but he's a successful one too.

I look at Dyson's maps and realize I'll never come close to the skill the man has but then again, I've never been much of an artist. So color me excited when Dyson hit his milestone of $300 a map  - maps that fund at $300 or more get released under a free commercial license for anyone to use (you don't even have to be a backer, but really, you should ;) Dyson has promised me a complete and detailed breakdown of this whole "use my shit for free" scheme for his highly funded map releases (which I will share in a follow up post.) As someone that likes to write small projects for his own personal use, free use of Dyson's maps combined with the stock art that +Kevin Crawford has released from his Kickstarters gives one a hell of a head start if you want to share your creation with the public at large.

Now, if you haven't gotten your fill of maps yet, the next post in the series will take a peek at +matt jackson and his excellent maps.