Do You Fear "Fear" in Your RPGs?

So, we discussed fear in the latest episode of The Brainstorm Podcast, both as a mechanic for the PCs and using it with effect on the players themselves.

As an effect on the PCs, it usually falls into one of two results - frozen with fear or "oh shit! Run!". Which is fine and all, but doesn't really replicate true fear.

Here is the Fear spell in AD&D 1e 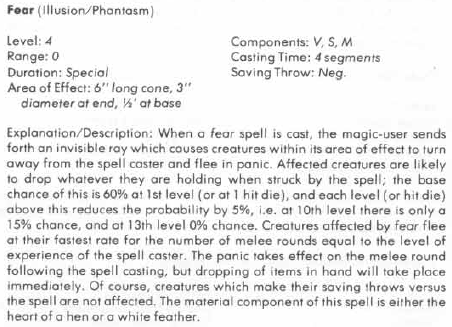 True "fear" gets into the heads of the players. It's harder to pull off and probably works best with props - which means it's damn near impossible to pull of on a VTT.

Running away is a pain in the ass, but getting into the heads of your players? Priceless.

So, how do you instill fear in your players?
Posted by Tenkar at 5:57 PM