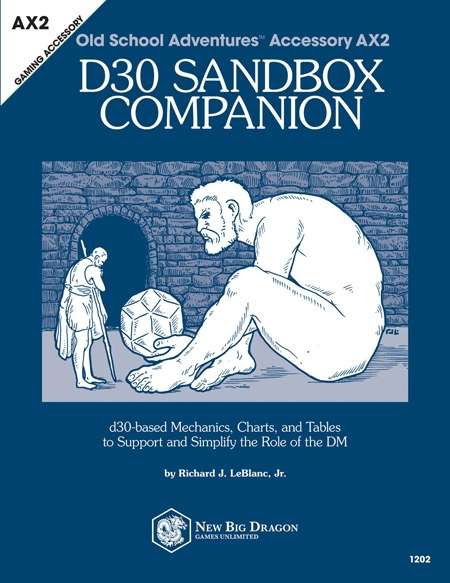 As the OSR Christmas Giveaway slows down (there is more to come) I'm in the process of opening up my Swords & Wizardry campaign to more of a sandbox style campaign, which was the goal from the get go. With the main party now averaging 3rd level, they can spread their wings a bit without the constant fear of a TPK in the wilderness.

The timing of the release of the D30 Sandbox Companion couldn't be better. The amount of inspiration squeezed into 50 some odd pages of charts and tables has left me in awe. I'm going to come right out and say that at $4.95, it is a steal.

Need hexes to map with? Got you covered?

Hex Crawl Worksheet? It's there (and will be put to good use, shortly)

Tables for sandbox style location, inspiration, NPC details (and details and details), recruitment, sages, Taverns (need to add a Tenkar's Tavern to the table ;), shops, settlements, heraldry (worth 5 bucks on its own, weather, encounters, places cults and more and more and...

Holy shit! In the right hands, this and some of +Dyson Logos or +matt jackson 's maps and you can have a damn near spontaneous campaign at your finger tips!

Best $4.95 an Old School DM could spend in 2014 on gaming. To prove it, I'm going to buy 1 copy of the D30 Sandbox Companion for a random commenter on this post. Open for comments for 24 hrs after this post goes up. Must have an OBS / RPGNow account to receive the gift. Or just buy yourself a copy. It is THAT good.

d30-based Mechanics, Charts, and Tables to Support and Simplify the Role of the DM

The d30 Sandbox Companion is the ideal right-hand man for the DM who wants to avoid his sandbox campaign running him. Whether starting an adventure from scratch, filling in the details of a campaign world, or just struggling to keep up with players, this compilation of d30-based mechanics, charts, and tables will support and simplify the role of the DM/GM at the tabletop. Inside these 30-something pages you’ll find a host of d30-based sandbox resources.

While the majority of the charts and tables in the book are generic to wilderness and settlement settings, NPC tables include details for 1e and BX comparable games, including Oe D&D, 1e AD&D, BX D&D, Swords & Wizardry, OSRIC, and Labyrinth Lord.

Inside these 30-something pages you’ll find
a host of d30-based sandbox resources, including:

• a robust adventure generator that allows the DM flexibility to interpret its results, and to support existing campaigns

• location generators for ruins, temples, magical places, castles/keeps/strongholds, and settlements of all sizes

• an extensive set of NPC tools for both classed and non-classed characters, including: occupations, physical traits, persona & behavior, background, eccentricities, talents, and languages

• a system for quick-and-easy recruitment of henchmen & hirelings, including their reactions, and loyalty

+ a wilderness mapping key, a Hex Crawl Worksheet, a Settlement Worksheet, and an NPC Record Sheet to assist DMs in fleshing out their campaign worlds