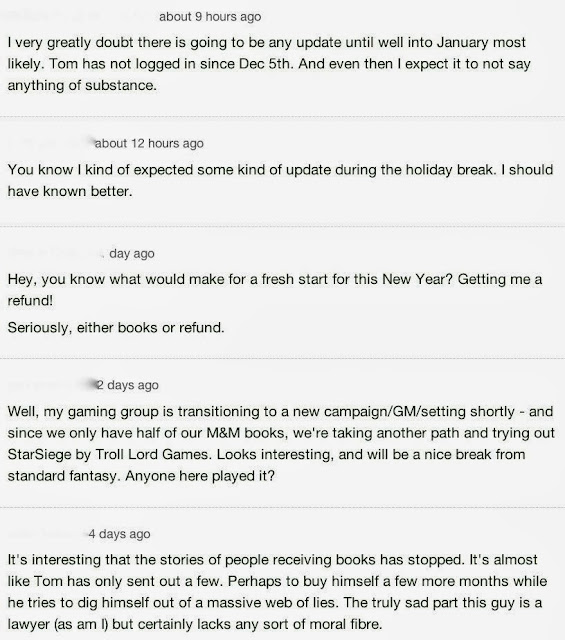 The above are the latest comments from the Myth & Magic Player's Guide Kickstarter. I've edited out names of the backers, as Tom has been known to have a vindictive streak against those that call him out on his "mistruths" (Tom is a lawyer, so we have to be careful. Besides, Tom was nice enough to post my full name and shipping info in the comments section when I called him out earlier. Then he shipped my book - but apparently it was just to shut me up).

I'm really beginning to think that the Dark Side of Kickstarter is inhabited by Toms, Gareths and Mikes. The fact that Mike comes out as the lesser of three evils yet again is telling - I'd prefer a fool over a vindictive "mistruther" and a full of shit publisher.

All three seem to have figured out that if all you have are lies and half truths to give to your backers, you're better off hiding. Mikey figured that one out a bit quicker than the other two, and is the only one to come clean with his foolishness and failures. I'd actually have a drink with Mikey, so long as he paid for his own tab up front. I'm not THAT stupid ;)
Posted by Tenkar at 7:44 PM