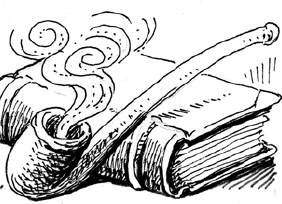 Holly Hobb is one of the earliest adventuring halflings of historical record. Holly, who preferred to be called by his last name Hobb, as Holly was unsuitable for an adventuring halfling, enjoyed peace and quite whenever it could be found and even when it couldn't. He would often stop to smoke his pipe in the darkest and deepest dungeons and crypts, in the firm believe that a calm mind led to calm success. Not every creature agreed with him.

Thus it was that he searched out The Blue Wizard, and convinced him to craft a pipe of wonder. The price Holly paid is not recorded in history, but it is believed that a piece of his soul was used to enchant the pipe that bears his name.

In the hands of a non-halfling, Holly Hobb's Pipe of Perfect Peace appears to be an ever ready magical pipe. The tobacco is always fresh and properly packed. Smoking the pipe relaxes the mind. After 5 minutes of smoking the pipe, the PC heals 1d4 Hit Points or 1 point of Spellburn. He must also make a Stamina Save of 12 or better or fall into a magical slumber for 2d10 rounds from which he will not awake until the duration is up. The pipe can be used for healing once per day.

In the hands of a halfling, Holly Hobb's Pipe of Perfect Peace shows it's true powers. In addition to the above healing properties (a halfling only needs to roll a Stamina Save of 5 or better to avoid falling asleep) the halfling can use the pipe to cast Choking Cloud and Sleep each once per day as if he were a Wizard of the same level. Int does not effect the spell check but Luck does. On a failure, the spell is lost for the day as usual. On a roll of a natural 1, the halfling mistakenly inhales too much smoke and takes 1d4 damage and is unable to act for 1d3 rounds as he recovers from the smoke inhalation.