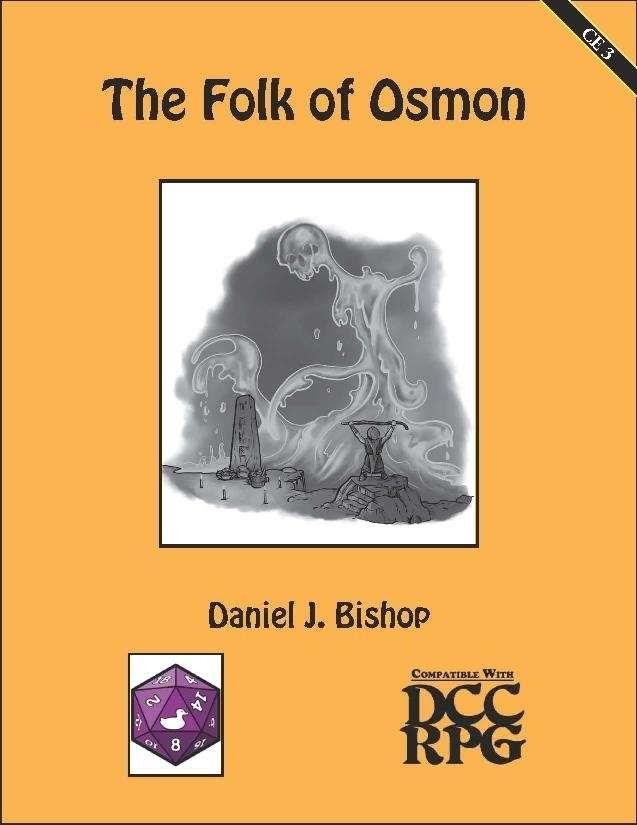 The Folk of Osmon is the third release in +Daniel Bishop 's Campaign Elements series. These are set pieces, locations, hooks, etc meant to be dropped into an ongoing campaign or to be used when the party zigs instead of zags. In many ways, their are the sandbox elements currentlt missing from much DCC RPG play.

The Folk of Osmon is a setting piece. As the scale is 10' per hex, the scale isnt large, but the value certainly is.  A new human like race, four new creature, natural hazards, random encounter charts (often overlooked in other DCC RPG adventures), four fairly well detailed encounters / hooks / mini adventures and three other possible hooks for the Judge to flesh out.

Daniel squeezes one hell of a lot of gameplay into a relatively small page count. Probably my favorite of the three releases thus far and I've liked them all.

A mighty civilization once thrived where now only lonely Osmon Mire stretches across the land.  The crumbled and vine-laden ruins of ages-old buildings arise here and there from the reedy mud and water.  The remains of statues and derelict temples adorn low hills rising from the muck.  Fell beasts roam the mire at night and man-like shapes haunt the swamp.  After dark none willingly passes the low hill, with its blood-encrusted altar stone, where the Folk of Osmon are said to sacrifice their victims.

Each of these areas is short enough to be played through by most groups in only a single session.  That doesn't mean that the value of the area is limited to a single session – each adventure includes notes on “squeezing it dry”…effectively getting the maximum re-use from your investment.