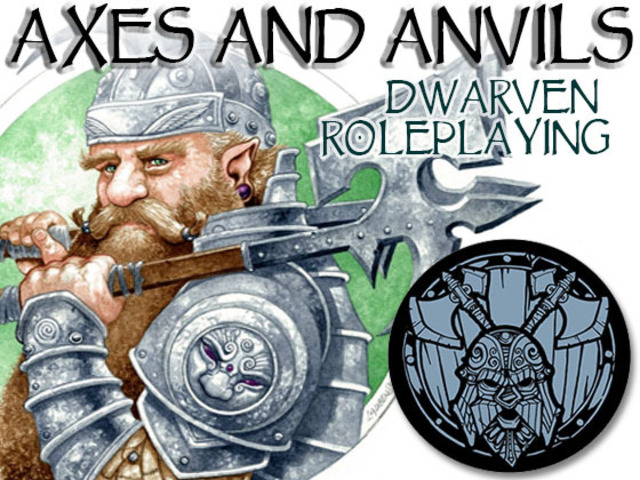 My last post may have given the wring (erh?) impression about Andrew and the part he plays in all of this. Andrew is a godsend (more than that Mike - he's a gentleman and a lifesaver - the life being your own). When my company went south (you never had a "company" - you had the money from your supporters support you and a few others for a few months with nothing to show for it) and took a lot of my life with it I was floundering - I still am in many ways (truthful statement from Mike - mark it on your calendar) . One of the problems has been that the pressures and related stress have made it very hard to muster the creativity I so badly need to see this through (I thought the old excuse was that you were just the "idea man" and the writing was the responsibility of others). It's like trying to write with a gun to your head. Andrew was a vocal member of the Axes and Anvils community whose posts often contained a lot of really useful insights. He volunteered to help and I took him on (you had little choice - you had nothing in hand). He has helped me get my thoughts together and has drafted a lot of material to help flesh out the working test draft I have been showing around at cons. What he is not is responsible for any of this. This project is my sole responsibili ty. I didn't mean to suggest that should I fail to produce when I set my "get this out" plan into effect on Monday that he is then responsible for picking up the pieces. His only role will be to look at what i have before I collect it up and publish with no further delay no matter what the state of the draft (wait! I thought Andrew was actively writing this - now you say you are and he's not?). One of my motivations to plow through is to avoid the self imposed consequence of having to share a cottage cheese of a draft (in other words - to show how little you actually accomplished after taking the money of your supporters or are you saying what Andrew has written so far isn't publishable? Because I'm fairly sure Andrew could make this "publishable" in a lot less time without your daily meddling). It is also important to note that he will also be looking over everything I generate so that he has the opportunity to feed back to me, so there will be a delay inherent in when I write something and when I can share excerpts from it (again, this is opposite what was said earlier). He has a great grasp on what I'm trying to do and what the system does as a whole so his insights will really help (Andrew, I'd completely understand if you withdrew from this clusterfuck). I look forward to diving in on Monday and showing you all what we have. Thanks.

for the benefit of Mike I'm including the definition of Transparent:

a : free from pretense or deceit : frank
b : easily detected or seen through : obvious
c : readily understood
d : characterized by visibility or accessibility of information especially concerning business practices
Posted by Tenkar at 11:51 AM